Cooking with a Blowtorch 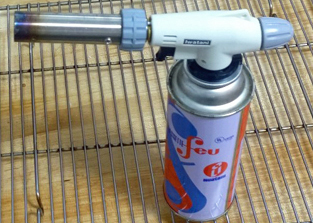 The latest design for the Iwatani Cooking Torch, (9,725 BTU/h) is ideal for the home chef for such things as Creme Brulee, and searing small amounts of meat and fish.

The first time I used a blowtorch in the kitchen was many years ago when making creme brulee. For most professional and home chefs this is a must technique to get the proper crunchy caramelized topping on a creme brulee. 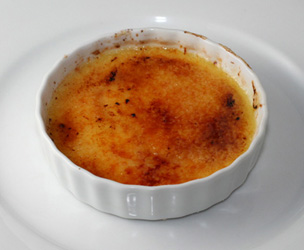 Creme Brulee finished with a blowtorch

The first time I remember seeing a blowtorch being used was in Nobu NYC. Just after the flagship restaurant opened I went for lunch and sat at the sushi bar where I was able to watch the chef prepare dishes. I was surprised when I saw the chef cook many fish dish dishes very lightly using a small blow torch. When using a blowtorch on sushi you just want to sear the fish, not cook it. It’s best to start with fish at room temperature or slightly chilled. You want to sear the meat enough that you still have the raw texture in the center much , like preparing a steak rare. It is also important to sear the fish on top and only one side, otherwise the fish can become overcooked. One thing to remember is that the flame of a blowtorch can get much hotter than when using a grill. This temperature is high enough to melt many common metals, such as aluminum and copper, and hot enough to vaporize many organic compounds as well.

When using a blowtorch it is best to use a sweeping motion, where the flame goes slowly back and forth across the surface to evenly ‘scorch’ the food. Don’t concentrate too long on one area, or the food may burn. We are looking to achieve the Maillard Reaction not pyrolysis which begins above 355F.

One of my favorite fishes to cook with a blowtorch is fresh mackerel purchased from the Union Square Market when in season. 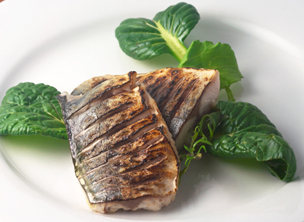 Either use a short salt brine or salt the fish 20 minutes ahead of time. This will help in flavor and allow the fish to retain more flavor. Use a sharp knife to score the fish. This will prevent curling during cooking. Depending on your personal taste (sear vs. more cooked) the time you spend using the blow torch will vary. You can place the fish two at a time in a cast iron pan. Just make sure there is nothing in the vicinity that will catch fire and do not use aluminum foil since it will ignite.

One of the more popular techniques with a blow torch is for finishing cooking meat that has been cooked using sous vide. The sous vide technique cooks the meat perfectly the same temperature throughout. When removed from the bag one has to sear the meat to develop color, flavor, and textural contrast on its surface, and to help render and soften its fat. While we prefer to use a hot cast-iron pan for a rib eye steak using a blow torch works better for a rack of lamb.

Other Great Uses for theBlowtorch in Cooking

Blowtorches are also great for easily skinning peppers and tomatoes – a quick blast with a blowtorch is much quicker and easier than roasting in the oven for 20 minutes or putting under the broiler.--- Warming up knives to cut through frozen foods.--- Charring Corn And --Of course Marshmallows and Baked Alaska

What is torch taste?

Torch taste is the unpleasant fuel taste that is associated with dishes that have been finished using a blowtorch. It is most pronounced in fatty meat dishes and when finishing off beef dishes. It is less noticeable in dishes such as creme brulee or when used to cook fish.

What is the cause of torch taste?

1) Incomplete combustion of propane and other components found in propane gas. Note: propane and butane and are all impregnated with sulfury odorants such as ethyl mercaptan, as a safety measure so you can smell a gas leak. If the flame is not hot enough all the gases will not be oxidized and may end up on your food. To be sure that the flame produced by the torch is a fully oxidizing flame you need to see a dark blue, relatively short, flame that hisses and roars. A yellow flame will not completely oxidize the gases.

2) Too high a heat put directly onto the surface of your food. Dave Arnold from Booker and Dax Lab tested finishing meat using Modernist Cuisine recommend MAPP gas, which burns faster and at a higher temperature than propane and butane. But after using a gas chromatograph to study the effects of torching meat with different fuels Arnold concluded that torch-taste may actually "be caused by these blowtorches putting too high direct heat on the meat".Arnold found that by sending the blowtorch flme through a wire mesh of a chinois to tame the flame the torch flavor was greatly reduced. This concept was what gave Arnold the idea for the Searzall-(see reference below)- which transforms a pencil thin, too hot flame, into a much more even, almost radiant, infrared heater. Note: the current model of Searzall uses a paladium coated screen... do not try using your blowtorch with a chinois unless you know the composition and melting point.

How to Use a Blowtorch --Great British Chefs