Confit is a method of cooking food in fat, oil or a water syrup at a low temperature. Confit cooking is not deep frying since it is done at temperatures around 93C or 200F and sometimes lower. Deep frying typically takes place at temperatures between 325 (163°C) and 450°F (232°C).

Although the term is synomous with long slow cooking in oil or fat, the term "confit" means "preserved". In meat cooking this requires the meat to be salted as part of the preservation process. After salting and cooking in the fat, confit can last for several months when properly sealed and left in a cool placd. Confit is one of the oldest ways to preserve food.

How does temperature affect the breakdown of proteins in meat?

Connective tissues such as tendons and ligaments contain large amounts of collagen which makes the meat we eat very tough. Collagen begins to denature at 140°F/60°C squeezing meat fibers leading to a release of juices (containing water) and shrinkage. At 160F collagen will begin to dissolve and turn into a rich liquid, gelatin. Denaturation of the collagen molecule is a kinetic process, and hence a function of both temperature and duration of heating. Cooking at low temperatures require long periods of time to liquify collagen. This will give meat flavor and a silky texture. For a comparison of weight loss at different temperatures see why meat shrinks when cooked.

Note: Gelatin is a mixture of peptides and proteins formed from broken down collagen. Gelatin is soluble in ot water and forms a gel when cooled. - see image below.

Elastin which is found more frequently in older animals is a yellow connective tissue and does not break down in cooking. Elastin is found primarily in ligaments but also in smaller amounts in tendons. 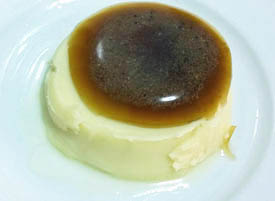 Image above: gelatin and duck fat after confit cooking

After confit duck is removed the mixture is cooled and inverted onto a plate. Image shows gelatin solution that settled to the bottom. This is a result of liquids being squeezed out at temperatures above 140F. Higher temperatures are needed to breakdown the collagen into gelatin. Minimizing loss of fluids from meat is only possible by cooking at low temperature.

Note on Cooking Fish: the collagen levels in fish are much lower than land animals -- except for squid and octopus which are high in collagen.

How does temperature affect fat in meat?

Fat is crucial to meat texture. Waxy when it is cold, fat does not evaporate when you are cooking as does water. It melts and lubricates the fibers as they are getting tougher under the heat. Fat is also the source of much of the flavor in meat. Fats will not break down during cooking unless the temperature excedes the fats smoke point . The smoke point for duck fat is 375°F/190°C.

Why does meat become dry when cooked --And, why does confit cooking keep meat moist?

The amount of liquid water expelled from muscle fibers is related primarily to the temperature the meat is heated to. Meat that is cooked above 160F in a liquid can become dry as water from the meat is release into the bathing solution. Meat that is cooked in an oven exposed to air will cause water to evaporate from its surface and over time dry out the meat. Confit cooking can help keep meat and fish moist in two ways. First by cooking at a low temperature (200F) water will remain in the liquid and bound state to proteins in the meat. Cooking meat in fat (which is hydrophobic) will also help to keep some water from escaping.

What is the difference between deep frying and confit cooking?

Deep frying is the process of simmering food in hot fat usually temperatures between 325 and 450°F. Due to the high temperature involved and the high heat conduction of oil, it cooks food extremely quickly. This produces a crispy outside and moist inside on the food. The appearance that the fat is boiling is because water in the food boils and turns to steam since the temperature of the fat is above 212F. As a crust

The fat appears to boil when the food is immersed in it because the water in the food boils and produces steam. As the water near the surface of the food being cooked is evaporated and the surface crusts over, sealing the remaining water in the interior of the ingredient, the bubbling ceases. At the same time the high heat causes the Maillard reaction browning the outside of the food producing a crust which seals additional water inside the meat. As long as the oil is hot enough and the food is not immersed in the oil for too long, oil penetration will be confined to the outer surface. However, if the food is cooked in the oil for too long, too much water will be lost and the oil will begin to penetrate the food.

Confit cooking uses a much lower temperature than deep frying usually between 225 to 275°F. During the course of cooking, the fat temperature should not rise much above 190 to 200°F. These temperatures are hot enough to break down the tough connective tissue but not hot enough to boil water or cause excssive evaporation. The meat will cook tender with little moisture loss. Cooking times in confit are measured in hours and compared to minutes in deep frying 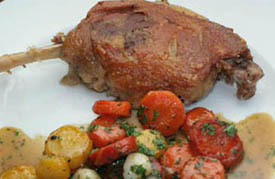 What is Faux Confit?

Nathan Myhrvold has demonstrated that he can reproduce the duck confit by using a steam and air mixture to cook the duck leg and then flavor its surface with oil. For a discussion on this see: Interview with Nathan Myhrvold 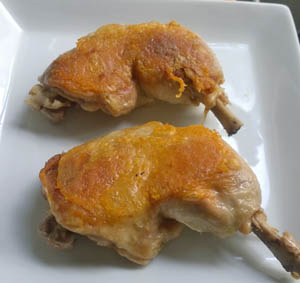 Image above: These chicken legs were done confit for 3 hours (immersed completely in duck fat) at 200F and then the skin was crisped in a saute pan using the same technique as with duck leg confit. The result is an unbelievable moist leg --falling off the bone meat -- with a very crispy skin. The flavor of duck permeates the chicken but not does not overwelm the chicken taste. Adding a few garlic cloves will give you confit garlic to go with the chicken.