On this page:
Structure of Muscle Fiber, Scientific Basis for Brining, Comparison of Brining Solutions, Applications to Cooking, References, Glossary of Terms

In food preparation, curing refers to various preservation and flavoring processes, especially of meat or fish, by the addition of a combination of salt, sugar and either nitrate or nitrite. Many curing processes also involve smoking. The etymology of the term is unclear, but it is thought to derive from the same Latin cura, -ae, from which the other English meanings are also derived.

Curing with salt and sugar may be called salting, salt-curing, sugar-curing or honey-curing. The application of pellets of salt, called corns, is often called corning. Curing in a water solution or brine is called wet-curing or pickling or brining. Paul Bertolli notes that a pickle contains nitrite in addition to salt. (Bertolli 2003) The curing of fish is sometimes called kippering.

Salt inhibits the growth of spoilage-causing microorganisms by drawing water out of microbial cells through osmosis. As the unwanted bacterial population decreases, other beneficial bacteria, primarily of the Lactobacillus genus, come to the fore and generate an acidic environment (around 4.5 pH). The sugar included in the cure is used as food by the lactobacilli; generally dextrose is preferred over sucrose, or table sugar, because it seems to be more thoroughly consumed by the bacteria. This process is in fact a form of fermentation, and, in addition to reducing further the ability of the spoilage bacteria to grow, accounts for the tangy flavor of some cured products. Concentrations of salt up to 20% are required to kill most species of unwanted bacteria.xxxSmoking adds chemicals to the surface of an item which affect the ability of bacteria to grow, inhibit oxidation (and thus rancidity), and improve flavor.

Nitrate and Nitrite CompoundsxxNitrates and nitrites not only help kill bacteria, but also produce a characteristic flavor, and give meat a pink or red color. Nitrate (NO3), in the form of either sodium nitrate or potassium nitrate, is used as a source for nitrite (NO2). The nitrite further breaks down in the meat into nitric oxide (NO), which then binds to the iron atom in the center of myoglobin's heme group, preventing oxidation.

The presence of nitrates and nitrites in food is controversial due to the development of nitrosamines when the food, primarily bacon, is cooked at high temperatures. The nitrate and nitrite compounds themselves are not harmful, however, and are among the antioxidants found in fresh vegetables. (National Academy 1981) The usage of either compound is carefully regulated in the production of cured products; in the United States, their concentration in finished products is limited to 200 ppm, and is usually lower. Finally, they are irreplaceable in the prevention of botulinum poisoning from consumption of dry-cured sausages.

Historically, peoples around the world have cured meat, in order not to waste valuable food, and to insure against poor harvests or hunting seasons. Although a salt-rich diet is currently implicated in risk for heart disease , in the past protein deficiency was a greater problem.

Salt cod, which was air-dried in cool northern Europe, was a civilization-changing food product, in that a bountiful but perishable food supply could be converted to a form that allowed for wide travel and thus exploration.

Salted meat and fish are commonly eaten as a staple of the diet in North Africa, Southern China and in the Arctic where they are associated with nasopharyngeal cancer caused by infection by the Epstein-Barr Virus. One study hypothesizes that the actual vector is anaerobic bacteria found in salted fish. (The Scientist 1999)

Combine the dill, salt, sugar and zest in a bowl and mix well. Lay a large piece of plastic wrap on a plate. Place 1/2 of the dill mixture on the wrap. Place the salmon skin side down onto the mixture. Cover the fish with the remaining dill mixture. Wrap the salmon tightly in the plastic. Use an additional piece of plastic wrap around the initial wrapping. Place the plate in the refrigerator and put a medium weight (book) on top to help in the extraction of water from the fish. You might want to put some paper towels between the fish and weight since a bit of liquid will be extracted. Rotate the fish, and pour off any released liquids every 12 hours.

After 36 hours unwrap the salmon and brush off and discard the herb and salt mixture. Blot the fish with paper towels. Dry the salmon in the regrigerator for about an hour before slicing the fish thinly on an angle. 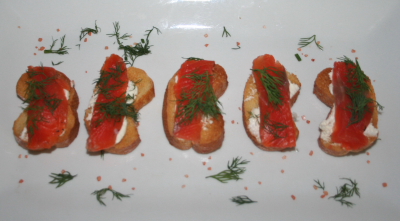 Shown in image: Gravlax on french toast with Crème fraîche and dill. A small dripping of high quality olive oil is also added.

If the duck if fatty, place the breast in the freezer for 30 minutes and then carefully remove the fat leaving a only a thin layer.

Mix the salt, sugar, smashed garlic and herbs in a bowl.

After 24 hours unwrap each breast and discard all the salt mixture. Blot dry with a paper towel. Slice thinly and serve similar to prosciutto.