Take a look at any commercial sorbet that has that nice smooth texture and you will see ingredients that most home sorbet recipes don't include. If one uses natural fruits and table sugar it is likely that the sorbet will contain ice crystals which takes away from the texture of the sorbet. What makes both comercial ice cream and sorbet smoother in texture is that they contain small ice crystals. So it all comes down to how to keep those ice crystals small. 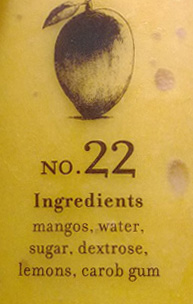 The lower the molecular weight, the greater the ability of a molecule to depress the freezing point. This isbecause there will be more molecules present in the solution. Lowering the freezing point of a solution therefore decreases the amount of ice crystals formed. Therefore, monosaccharides such as fructose or glucose (dextrose) produce a much softer and smoother sorbet than disaccharides such as sucrose. Most home cooks use only sucrose which results in formation of ice crystals in the freezer.

Invert sugar is syrup of table sugar (sucrose)that has been broken down into glucose and fructose. Also called Trimoline, it is sweeter than plain sugar and helps to keep frozen mixtures soft. It also retains moisture and is less prone to forming crystals. Inverted sugar syrup can be made by adding one gram of citric acid or ascorbic acid per kilogram of sugar. read more about inverted sugars

Corn syrup is more viscous than sugar syrup. It is made from the starch of maize and contains varying amounts of maltose and higher oligosaccharides, depending on the grade. Corn syrup is used in foods to soften texture, add volume, prevent crystallization of sugar, and enhance flavor. Corn syrup is distinct from high-fructose corn syrup (HFCS), which is manufactured from corn syrup by converting a large proportion of its glucose into fructose using the enzyme xylose isomerase, thus producing a sweeter compound due to higher levels of fructose. Glucose syrup was the primary corn sweetener in the United States prior to the expanded use of high fructose corn syrup production. HFCS is a variant in which other enzymes are used to convert some of the glucose into fructose. The resulting syrup is sweeter and more soluble. Corn syrup is also available as a retail product. The best-known brand in the U.S. is "Karo".

WHAT ARE NATURAL VEGETABLE GUMS?

Vegetable Gums are all polysaccharides of natural origin, capable of causing a large viscosity increase in solution, even at small concentrations. In the food industry they are used as thickening agents, gelling agents, emulsifying agents, and stabilizers. These large polysaccaride molecules are responsible for adding viscosity to the unfrozen portion of the water and thus holding this water so that it cannot migrate within the product and form ice crystals.

Guar gum is a thickener, but in small quantities can also prevent the growth of ice crystals which would cause the sorbet to harden into icicles. Chemically, guar gum is a polysaccharide composed of the sugars galactose and mannose. The backbone is a linear chain of ß 1,4-linked mannose residues to which galactose residues are 1,6-linked at every second mannose, forming short side-branches. Guar gum is economical because it has almost 8 times the water-thickening potency of cornstarch - only a very small quantity is needed for producing sufficient viscosity.

Xanthan gum is a polysaccharide, derived from the bacterial coat of Xanthomonas commonly used as a food thickening agent (in salad dressings, for example). Xanthan gum is a long chain polysaccharide composed of the sugars glucose, mannose, and glucuronic acid. The backbone is similar to cellulose, with added sidechains of trisacharides (three sugars in a chain).

Locust bean gum (LBG, also known as carob gum, carob bean gum, carobin, E410) is a galactomannan vegetable gum extracted from the seeds of the carob tree, mostly found in the Mediterranean region. The bean, when made into powder, is sweet—with a flavor similar to chocolate.

HOW MUCH VEGETABLE GUM SHOULD BE USED?

Xanthan gum has the ability to produce a large increase in the viscosity of a liquid by adding a very small quantity of gum, on the order of one percent. In most foods, it is used at 0.5%, and can be used in lower concentrations.