What gives hot sauce the heat and flavor? 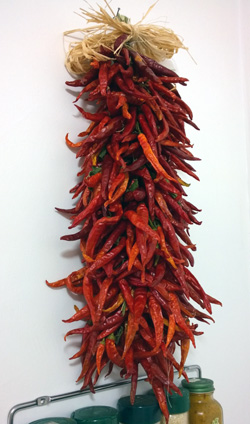 What are some types of peppers and chiles that provide heat and flavor? What are their Scoville Heat Units?

Chipotle --10,000 to 23,000 Scoville Heat Units --dried, smoked jalapeno pepper, with a dark brown color and flavor that is sweet and smoky.

And the over the top Hot Peppers

Bhut Jolokia or Ghost Pepper -- In 2007, Guinness World Records certified that the ghost pepper was the world's hottest chili pepper. The ghost chili is rated at more than one million Scoville Heat Units (SHUs). However, in the race to grow the hottest pepper, the ghost chili was superseded by the Trinidad Scorpion Butch T pepper in 2011 and the Carolina Reaper in 2013...In August 2017, Guinness World Records recognized the Carolina Reaper as the hottest pepper in the world, at 1,641,183 SHU

What is the molecule responsible for the heat in peppers?

About the Capsaicin Molecule

The chemical compound capsaicin (8-methyl-N-vanillyl-6-nonenamide) is the active component of chile peppers. . Capsaicin and several related compounds are called capsaicinoids and are produced as a secondary metabolite by chile peppers, probably as deterrents against herbivores. Pure capsaicin is a hydrophobic, colorless, odorless, crystalline to waxy compound.

What happens at the molecular level to the Capsaicin molecule?

The burning and painful sensations associated with capsaicin result from its molecular interaction with sensory neurons. The Capsaicin molecule, as a member of the vanilloid family, binds to a receptor called the vanilloid receptor subtype 1 (TRPV1). TRPV1 is a nonselective cation channel that may be activated by a wide variety of exogenous and endogenous physical and chemical stimuli. The best-known activators of TRPV1 are: temperature greater than 43°C; acidic conditions; capsaicin, the pungent compound in hot chilli peppers; allyl isothiocyanate, the pungent compound in mustard and wasabi. The activation of TRPV1 leads to a painful, burning sensation. Its endogenous activators include: low pH (acidic conditions),

First cloned in 1997, TRPV1 is an ion channel-type receptor. TRPV1, which can also be stimulated with heat, protons and physical abrasion, permits cations to pass through the cell membrane and into the cell when activated. The resulting depolarization of the neuron stimulates it to signal the brain. By binding to the TRPV1 receptor, the capsaicin molecule produces similar sensations to those of excessive heat or abrasive damage, explaining why the spiciness of capsaicin is described as a burning sensation.

With chronic exposure to capsaicin, neurons are depleted of neurotransmitters. This leads to reduction in sensation of pain and blockade of neurogenic inflammation. If capsaicin is removed, the neurons recover.

The TRPV1 ion channel has subsequently been shown to be a member of the superfamily of TRP ion channels, and as such is now referred to as TRPV1 (Previously referred to as VR1). There are a number of different TRP ion channels that have been shown to be sensitive to different ranges of temperature and probably are responsible for our range of temperature sensation. Thus, capsaicin does not actually cause a chemical burn; it causes only the sensation of one.

Where is Capsaicin found in peppers

Capsaicin is present in large quantities in the placental tissue (which holds the seeds), the internal membranes and, to a lesser extent, the other fleshy parts of the fruits of plants in the genus Capsicum. The seeds themselves do not produce any capsaicin, although the highest concentration of capsaicin can be found in the white pith of the inner wall, where the seeds are attached.

What is the solubility of capsaicin

Capsaicin is a nonpolar molecule, and is therefore hydrophobic. The capsaicin molecule has a long hydrocarbon tail. The chain allows it to bind very strongly with its lipoprotein receptor. Capsaicin is soluble in alcohol, but very little in water.

Because of the burning sensation caused by capsaicin when it comes in contact with mucous membranes, it is commonly used in food products to give them added spice or "heat" (piquancy). In high concentrations, capsaicin will also cause a burning effect on other sensitive areas of skin. The degree of heat found within a food is often measured on the Scoville scale.

It is common for people to experience pleasurable and even euphoriant effects from ingesting capsaicin. Folklore among self-described "chileheads" attributes this to pain-stimulated release of endorphins, a different mechanism from the local receptor overload that makes capsaicin effective as a topical analgesic. In support of this theory, there is some evidence that the effect can be blocked by naloxone and other compounds that compete for receptor sites with endorphins and opiates.

How to Neutralize Hot Foods in the Mouth

Capsaicin is an alkaloid oil, which cannot be neutralized in water – which is why drinking a glass of ice water to try and drown out hot food is unsuccessful.

Dairy products can reduce the heat of Capsaicin. A glass of milk or some yogurt. is one antidote that can be used if you have had too much spicy food. Dairy product work because one of proteins in dairy, called casein, helps break the bonds capsaicin forms on your nerve receptors .

Capsaicin can also be neutralized by alcohol but the amount of alcohol in a beer may not be substantial enough. . A study in the 1990 edition of the “Journal of Physiology and Behavior” found that drinks with five percent ethanol did not work any better than cool water at neutralizing peppers’ heat. Higher concentrations of ethanol can be effective but should be served on ice since warm alcohol can increase the burn.

Fatty food can also bind with the capsaicin and help relieve the pain. Think Avocado s... used to cut the spice in guacamole.

About the Scoville Scale

The Scoville scale is the measurement of the pungency (spicy heat) of chile peppers or other spicy foods reported in Scoville heat units (SHU). a function of capsaicin concentration. The scale is named after its creator, American pharmacist Wilbur Scoville. His method, devised in 1912, is known as the Scoville Organoleptic Test..

The Scoville scale is an empirical measurement dependent on the capsaicin sensitivity of testers and so is not a precise or accurate method to measure capsaicinoid concentration, however, capsaicin concentration can very roughly be estimated as ~18µM/SHU.

What are the Best Hot Sauces?

Altogether, the category includes literally thousands of brands that generate well over $240 million in annual sales. Hot Sauce Production is the 8th Fastest Growing Industry In The Country. 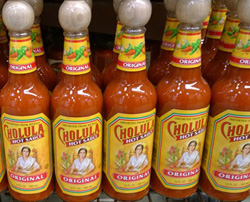 Cholula sauce --Cholula hot sauce is a brand is manufactured in Chapala, Jalisco, Mexico, and licensed by José Cuervo.

Many consider Cholula to be in the top 5 hot sauces. 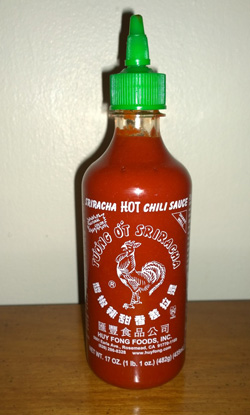 Sriracha sauce is a hot sauce made by Huy Fong Foods, California, in 1980 by Chinese-Vietnamese founder David Tran. It is also known as rooster sauce because of the rooster prominently featured on its label.

Sriracha chile sauces are made from ripe red jalapeño chile pepper. The company formerly used serrano chiles but found them difficult to harvest.

Sriracha hot sauce is often considered to be the best hot sauce around.

Tabasco Original --Tabasco sauce was first produced in 1868 by Edmund McIlhenny, a Maryland-born former banker who moved to Louisiana around 1840. --The original red variety of Tabasco pepper sauce measures 2,500–5,000 SHU on the Scoville scale -- The tabasco pepper is a variety of chile pepper species Capsicum frutescens. Scoville scale 30,000–50,000 for tabasco pepper.Tabasco is the world's leading hot sauce brand.

While the heat in black pepper comes from the molecule piperine, and all the chile heat is from the molecule capsacian, the flavor in chile's come from the fruit of the pepper. Many chefs include both black pepper and cayenne pepper to a dish to give a more rounded heat and flavor profile. But also adding combinations of different chile peppers will make a different.

While white pepper tastes hotter than black it has less flavor since the fruit portion of the pepper is removed.

The popular hot sauce Chulula uses both arbol pepper (subtle smokey flavor) and Pequin pepper (Pequin peppers are very hot, often 13–40 times hotter than jalapeños on the Scoville scale (100,000–140,000 units). Flavor is described as citrusy, smoky (if dried with wood smoke), and nutty) in their sauce.

A lot of chefs are now starting to use espelette pepper instead of cayenne for seasoning. This pepper from a region in France has great flavor with only a scoville of 4000.

AOC espelette peppers are cultivated in the following communes: Ainhoa, Cambo-les-Bains, Espelette, Halsou, Itxassou, Jatxou, Larressore, Saint-Pée-sur-Nivelle, Souraïde, and Ustaritz. It is harvested in late summer and, in September, characteristic festoons of pepper are hung on balconies and house walls throughout the communes to dry out.

The pepper only attains a maximum grade of 4,000 on the Scoville scale and therefore considered only mildly hot. It can be purchased as festoons of fresh or dried peppers, as ground pepper or purchased in many outdoor markets in France. It is worth seeking out.

How to Neutralize Hot Foods in the MouthBig List of Peppers