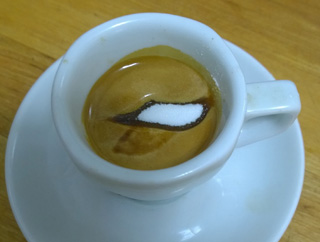 ABOUT A PERFECT SHOT

The perfect shot by many baristas is considered not to be a single but a double shot that is around 1.5 ounces of fluid. There are a few constants that go into this although they may vary slightly.

Most agree that to make this pull of espresso one should:

Use 14-16 grms of ground bean and when ready let the brew extract for 28-30 seconds, stopping the run when the cofee running begins to turn blonde from brown. The coffee should be extracted after a delay of 3-5 seconds after pushing the start button and then the shot should start with a slow drip, then develop into a gentle, even stream. This should yield that 1.5 ounce shot.

The starndard espresso machine should have a pressure of about 9-10 bars so that the espresso machine's pump just wins over the resistance of a tightly packed finely ground coffee filled portafilter basket. There should be a little space on top after applying the around 30 pounds of pressure to pack the portafilter. Remember, if the porafilter is packed to tight the pump will stall and no liquid will be released. If the portafilter is too loosely packed coffee will quickly pass through the portafilter and fill the cup too quickly. It is not that important how much pressure is used instead that the pressure you apply is consistent from one packing to the next.

Why does the shot extraction turn brown to blond?

And, why is it important to stop the run when the we see the extraction going from brown to blonde color?

The "solubles yield" or "Extraction Yield" is defined as the percentage (by weight) of the grounds that can be dissolved in the water. Put simply, how much of the coffee ends up in the cup.

Ideal yield is widely agreed to be 20%±2% (18%–22%). This was originally computed by the Coffee Brewing Institute (CBC), under the direction of Professor E. E. Lockhart at MIT in the 1950s, and has been verified by subsequent tests by the SCAA. According to the CBC, the best cup of coffee is obtained when approximately 18-22% of the flavoring material is extracted from the bean. see: Brewing Fundamentals

--Dr. Lockhart's work at the CBC was dedicated to the creation of the "Coffee Brewing Control Chart" which is still in use today. In essence, the brewing control chart provides a graphical representation of strength, extraction and brew formula in an easy to read format.

Yields of over 22% are "over-extracted", specifically bitter, as bitter components continue to be extracted after acids and sugars have largely completed extraction. In certain situations, yields surpassing 22% can be absent of bitterness.

Caffeine is extracted early, so higher yields do not yield more caffeinated coffee, only over-extracted coffee. Once all of the desirable components are extracted the coffee extract will turn blonde.

The grind is considered by many to be the key factor in making a perfet espresso.

Espresso coffee should be ground to a size in which the extraction process takes 28-30 seconds to yield 1.5-2 ounces of liquid. It is important to only adjust the grind and not the pressure one tamps with to control the flow rate. In addition to particle size, the humidity plays a dramatic role on extraction time. Since coffee is hydroscopic, it absorbs moisture from the air causing a tighter pack and longer extraction time. Thus, the grind setting must be changed slightly throughout the day as the barista perceives changes in extraction time.

WHY A GOOD COFFEE GRINDER IS SO IMPORTANT

Any barista will tell you that the single most important piece of gear in the espresso-making chain is the grinder. So buy your grinder first.

The reason that coffee aficionados tend to choose burr grinders over blade is that the beans are ground in a uniform size, and you have more control over your grind than you do with a blade. A uniform ground is much harder to do in a blade grinder, especially if you are trying to do a coarser ground, which is why burr grinders are whole heartedly recommended for anyone doing French press or pour overs.

The general rule of thumb when buying a coffee grinder is to go for one with larger grinding burrs, heavier overall weight and a low speed grind.

Espresso is made using very fine coffee particles, and require a grinder capable of producing a consistent grind at a very fine setting. The reason consistency is so important in an espresso grinder is that espresso brewing happens under a lot of pressure (9bar, or ~135psi) in a very short amount of time. Inconsistencies in grind will not only result in a varied of extraction rate, but may also result in extreme channeling. (Channeling occurs when there is a weak spot in the coffee puck that has been created under the high pressure during espresso extraction. The result is that the coffee around the channel will be very over-extracted while coffee further from the site of channeling will be under-extracted. The resulting espresso will be both bitter and sour simultaneously. You can often times see visible channels in spent coffee pucks.

When it comes to grind size, there are three factors which make the biggest difference: contact time, extraction rate and flow rate. To put it simply:

Every soluble component of coffee has a slightly different solubility. Some of the components of coffeewill be dissolved and extracted right away, and others will need more time. The first and most soluble parts of coffee are fruit acids and organic salts (light, bright, fruity flavours), closely followed by light aromatics created from the Maillard reactions and sugar browning during roasting (nuts, caramel, vanilla, chocolate, butter etc.) and lastly heavier organic matter (wood, ash, malt, tobacco etc.).

Increasing the surface area of the coffee makes it far easier for the water to dissolve its flavors. When you grind coffee, you’re increasing the surface area exponentially...."The most important thing to wrap your head around here is that grind size doesn't really change what is being extracted. It only changes when the things are extracted. All of the flavor is right there, in the coffee bean, ready to be extracted. Grind size just puts more or less of that flavor in front of the water right away..." See:Surface Area and Time

Crema is produced by the oils that are forced out of the ground beans by the pressure, forming a colloid where small drops of oil are suspended in water. This is one of the unique features of espresso, and it is one thing that connoisseurs of espresso use to judge the quality of a shot. A good crema should be mostly dark, but with some white stripes that give it an almost tiger-stripe look, with small bubbles. The crema should last as long as the shot itself, persisting as you drink it.

What compounds are in coffee beans?

What are the basic tastes?

Who makes the best Chocolate in the World?

What are the best Chocolate Bars?

What are the Best Chocolate Stores?