Induction cooking has been around for years but only recently has it become more popular as prices come down and professional chefs start to recognize many of the benefits.

What is induction cooking

-- An induction cooker is faster and more energy-efficient than a traditional electric cooking surface. It allows instant control of cooking energy similar to gas burners.
-- Because the surface of the cook top is only heated from contact with the vessel, the possibility of burn injury is significantly less than with other methods.

- energy is supplied directly to the cooking vessel by the magnetic field so most of the source energy gets transferred to that vessel.

-- the pot can heat up very quickly, so there is a learning curve on controlling the heat
-- only ferromagnetic pots can be used. glass and aluminum pots will not work

--Cooking vessels at the extremes of size--the very small and the very large--occasionally raise issues--(the usual minimum pot base size for activation is from 4 to 5 inches,?depending on particular unit.) But that is scarcely a major issue: if you really must have such a pot--say "a butter warmer"--there are accessories available that make it easy.

--It's expensive. In comparison to gas or electric stoves, an induction setup is likely to cost you considerably more

--the magnetic nature of the process may make your cookware a bit noisy. When used on high power settings, the magnetic field may vibrate loose pan handles or lids on pots, and it may even cause some lower-quality cookware or cookware with an uneven bottom surface to rock, rattle or buzz when cooking.

-- induction stoves are not recommended for those who have pacemakers since the magnetic fields may interfere with the device.

How does induction cooking work?

An induction cooker transfers electrical energy by induction from a coil of wire into a pot made of material which must be electrically conductive and ferromagnetic. The heat generated is similar to the unwanted heat dissipated in an electric transformer.

Induction heating is the process of heating an electrically conducting a metal object by electromagnetic induction. Eddy currents ( Foucault currents) are generated within the metal and resistance leads to heating of the metal. An induction heater (for any process) consists of an electromagnet, through which a high-frequency alternating current (AC) is passed. Heat may also be generated by magnetic hysteresis losses in materials that have significant relative permeability.

The coil is mounted under the cooking surface, and a large alternating current is passed through it. The current creates a changing magnetic field. When an electrically conductive pot is brought close to the cooking surface, the magnetic field induces an electrical current, called an "eddy current", in the pot. The eddy current, flowing through the electrical resistance, produces heat; the pot gets hot and heats its contents by heat conduction.

When is induction cooking very useful in cooking?

1) Sauces e.g., butter sauces or butter poaching requires that the butter (sauce) be kept below 160F unless a beurre monte is made which will allow higher temperatures before breaking. This is difficult to control using a gas or electric stove. Using an induction cooktop the temperature can be controlled usually within 5-10 degree F.

2) shortened amount of time needed to preheat or cook food on the stovetop. Pasta can be cooked in half the time.

3) The induction stove can be used for slow cooking (see science of slow cooking) stews or vacuum packing bags immersed in a water bath to replace a sous vide cooker (see?science of sous vide cooking).Note: While sous vide method is possible the water temperature must be carefully monitored till you you become familiar with you stove temperatures. (Note: some recipes may be difficult if they require maintaining a temperature within a very small value).

4) Melting Chocolate - Set temperature to 115F and you can melt your chocolate directly in a pan without using a double boiler. 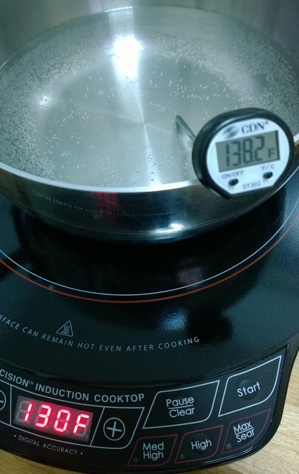 Image above: Induction cooktops can be used for slow cooking however in some models there may be a drifting increase in temperature over time.

What is Sous Vide Cooking?

Why food sticks to pans

Why does meat shrink when cooked?