Why does food stick to stainless steel surfaces

--AND, HOW TO PREVENT FOOD FROM STICKING TO PANS--

WHAT IS THE MAILLARD REACTION

-- does not react with foods e.g., tomatoes and wine
-- makes excellent sauces after sautéing by dissolving products of caramelization and mallaird reaction

Food that sticks is caused by chemical bonds that form between the food and the material of the pan - almost always a metal. These bonds may be relatively weak van der Waals forces or covalent bonds. Protein-rich foods are particularly prone to sticking because the proteins can form complexes with metal atoms, such as iron, in the pan.

How to prevent sticking or why hot oil prevents sticking?

The oil, being liquid, fills in the valleys and caves of the pan surface. Although the pan may look smooth at a microscopic level the surface of even the smoothest metal pan looks rough with hills, valleys and even caves. Hot oil is less viscous than cold oil and will immediately flow filling the gaps.

"A small amount of oil added to a very hot pan almost instantly becomes very hot oil. The oil quickly sears the outside of the food and causes water to be released from the food. This layer of water vapor ("steam") lifts the food atop the oil film and keeps it from touching the hot pan surface. If the oil is not hot enough, the steam effect will not occur and the food will fuse to the (too) cool pan surface." Source: Ask a Scientist, Newton BBC

In addition very hot oil will react with the metal atoms of the pan and form a coating called a patina. This leaves few free metal atoms to react with the food. This coating can easily be removed by detergents, however, so it has to be reapplied before each use of the pan. In the case of cast-iron pans the patina becomes more permanent. It has been suggested that the patina could form by a sequence of cracking followed by polymerization. Source: Kitchen Chemistry, RSC

Added Note about patinas:
"Oil begins to thermally crack near its smoke point and leaves behind carbon molecules in the patina matrix. All oils are not the same. They have different smoke points and different carbon residues. The carbon residue of an oil is a chemical property that is measured analytically by a Micro Carbon Residue Tester. The higher the carbon residue of an oil, the more carbon it leaves behind after its cracking. It is the unsaturated molecules in the oil that polymerize and bond the whole mass together. The higher the carbon content of the seasoning matrix (or lower the hydrogen content) the more durable the patina". Source: Kitchen Chemistry, RSC

What causes the sizzling?

The sizzling sounds you hear are the the sound of water vaporizing on the surface of the oil. When the sizzling stops that means the temperature can quickly rise and care must be taken or the food will burn.

Browning occur when temperatures reach 285F and the Maillard reaction can occur. A side product of the reaction is water. So, even as food is browning we will hear the sizzle. Once the food is completely browned water will not be released and the sizzling sounds will stop.

Tips to prevent food from sticking

1. Make sure the surface is clean. Small attached food particles can provide contact surfaces of the pan.

2. Make sure the food surface is dry and not too cold. Let food from the refrigerator rest for a while at room temperature. Cold meat sticks easily to stainless steel surfaces when cooked. Remember if the food surface has water it will lower the temperature of the oil and promote sticking. You can either pat the surface of the food dry or in the case of fish with skin, slide a knife blade over the skin to remove excess moisture. This will also allow for a crisper skin.

NOTE: some cooks prefer to add a small layer of oil to the surface of the dry food to help prevent sticking.

3.Make sure the oil is HOT. Either add cold oil to a hot pan or start with a cold pan and cold oil.

Both methods work fine. However we prefer adding cold oil to a hot pan.

--->Advantages of cold oil to hot pan --a hot pan requires less oil to cover the surface perhaps as little as half as much. Hot oil is less viscous and immediately flows. Less oil will be also be needed to fill the micro-crevices and provide the necessary barrier between food and pan surface. In addition the reduced thermal trip to target temperature will cause the fat to deteriorate less.

NOTE: Some chefs however prefer adding cold oil to a cold pan some cooks prefer this technique because the appearance of the oil in the pan can give you some indication of when the pan has reached the proper temperature

The oil should begin to ripple, and spread quite quickly over the pan. If your pan was hot enough, this process should only take a 'few seconds' .

Ideally you want to add the food right before the smoke point. If you wait too long your pan will get too hot and the oil will start to smoke, then turn brown after which damage to you pan can occur.

The pan is hot enough if a few small drops of water flicked from your fingertips vaporize immediately, or if a larger drop of water hisses and floats across the surface of the pan on a cushion of its own steam (Leidenfrost effect).

Note: .."The Leidenfrost effect is a phenomenon in which a liquid, in near contact with a mass significantly hotter than the liquid's boiling point, produces an insulating vapor layer which keeps that liquid from boiling rapidly. This is most commonly seen when cooking; one sprinkles drops of water in a skillet to gauge its temperature—if the skillet's temperature is at or above the Leidenfrost point, the water skitters across the metal and takes longer to evaporate than it would in a skillet that is above boiling temperature, but below the temperature of the Leidenfrost point..". see wikipedia

With experience you will detect the exact time to add food to the hot oil.

-4. Don't crowd the pan. Crowding usually lowers the temperature and releases moisture into the pan. If moisture is released the temperature will go below that required to produce caramelization and the Maillard reaction. As a result no browning will occur. 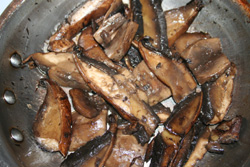 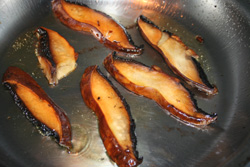 Overcrowding a pan increases does not allow the maillard reaction =Flavor lacking depth and complexity.

If necessary, you should cook food in batches, removing each batch and reheating the pan and adding more oil as required. Also, unless the recipe specifically calls for it, do not cover the pan while cooking. Trapped steam from the cooking side of the food will soften the top side. Ideally sautéed item have a crispy outside, although this depends heavily on the food item (sautéed steak: crispy; sautéed carrots: not crispy)

5. Do not move the food to quickly. Even if some sticking has occurred it will most probably be released from the pan after a short time.

If food does stick and you are using a stainless steel pan, like all-clad, then lower the heat a little. The food will release on its own.

An exception is diced vegetables which need to be moved to prevent burning. A uniform application of oil will eliminate any sticking spots and produce an equally uniform sear. Heat your pan over a medium-high to high flame.

As long as you hear that sizzling sound then there's still water in the pan and foods won't burn. As soon as the sizzling stops that's when burning can happen.

The end result-- Crispy outside, moist, non-oily inside IMAGE: SAUTÉ CHICKEN SKIN SIDE DOWN

If food is fried correctly in a small amount of oil the end result will be a crispy outside and moist interior. If the oil temperature drops and an insufficient amount of steam is produced the food can obtain an oily consistency.

When food is fried with a small amount of oil, the hot oil causes the internal moisture in the food to boil, which then escapes as steam. The steam helps prevent the surrounding oil from permeating the food and making it greasy. The allows for a crispy outside and moist oily free interior of the food. If the temperature of the oil drops too low less steam is produced and and oily consistency is produced.

\What type of frying pan to use?

If you want to sauté food correctly then it is necessary to get a high quality pan. Be sure to look for a heavy gauge stainless steel with aluminum sandwiched in-between. Such a pan will distribute heat evenly without burning your food and be highly responsive to sudden temperature adjustments. A heavy metal plate will also ensure the base of the pan stays flat and does not warp with use. If the bottom is uneven it can cause hotspots and allow for unevenly cooked food. Some cooks prefer using a cast iron skillet for searing, but these pans are not recommended for deglazing.

Kitchen Chemistry -- Why do pans stick? Royal Society of Chemistry

Why is Stainless Steel Stainless?

Science behind Cast Iron Skillets -- How to Cook with them and season them properly.