Tempranillo is a variety of black grape widely grown to make full-bodied red wines[1] in its native Spain. It is the main grape used in Rioja, and is often referred to as Spain's "noble grape".[2] Its name is the diminutive of the Spanish temprano ("early"),[1] a reference to the fact that it ripens several weeks earlier than most Spanish red grapes. In the last 100 years it has been planted in Mexico, New Zealand, South America, USA, South Africa, Australia, Turkey and Canada.

Tempranillo wines can be consumed young, but the most expensive ones are aged for several years in oak barrels. The wines are ruby red in colour, with aromas and flavors of berries, plum, tobacco, vanilla, leather and herb.

Until recently Tempranillo was thought to be related to the Pinot Noir grape, but recent genetic studies tend to discount this possibility.

Spanish cultivation of Vitis vinifera, the common ancestor of almost all vines in existence today, began in earnest with Phoenician settlement in the southern provinces. Later, according to the Roman writer Columella, wines were grown all over Spain, yet there are only scattered references to the name "Tempranillo". This is presumably because in many places, like the Valdepeas region, it was the main indigenous variety and assumed to be a different grape.[3]

Up until the 17th century Tempranillo-type vines remained confined to mainland Spain, where they were best suited to the slightly cooler climate of the northern provinces. Here the regions of La Rioja (Spain) and Valdepenas historically made them their most important variety and they still make up the majority grape of their finest blends.[2] 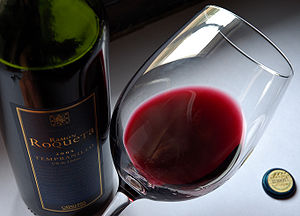 The grape was brought to America, possibly as seeds, with the Spanish Conquistadors in the 17th century, where it has largely retained its genetic identity and still strongly resembles its Spanish ancestors.[5] Due to its high susceptibility to pests and diseases (particularly phylloxera which devastated stocks in the 19th century and still threatens the vines today), Spanish Tempranillo has long been grafted onto more resistant rootstock, resulting in a slightly different grape style to those grown today in Chile and Argentina. Despite its apparent fragility, Tempranillo travelled widely during the last century and, following much trial and error, has become established in a surprising number of countries worldwide.

In 1905, Frederic Bioletti brought Tempranillo to California where it received a cool reception not only due to the encroaching era of Prohibition, but also because of the grape's dislike of hot, dry climates. It was much later, during the 1980s, that Californian Tempranillo-based wine production began to flourish, following the establishment of suitably mountainous sites. Production in this area more than doubled since 1993.[6]

Tempranillo is currently enjoying a renaissance in wine production worldwide. This surge began partly as a result of the efforts of a 'new wave' of Spanish growers who showed that it was possible to produce wines of great character and quality in areas outside of the Rioja region. One of the results of this has been that Tempranillo varietal wines are becoming more common, especially in the better-suited, cooler Spanish regions like Ribera del Duero, Navarra and Penedes. During the last decade, growers as far-flung as Australia, USA and South Africa have started significant Tempranillo plantations.[7]

In 1988, Jesus Galilea Esteban found a cluster of white grapes on one of the Tempranillo vines in his vineyard, Murillo de Rio Leza, located in Rioja.[8] He removed the cluster, leaving a heel which in turn produced two buds of white grapes. Galilea then contacted the Rioja government agency CIDA,[9] who grafted the buds at their research station in February 1989.[10]

CIDA concluded that apart from the leaves and fruit being a little smaller,[11] the new plants were identical to normal Tempranillo in most respects,[8] and confirmed this with DNA evidence.[12] The most notable difference was that the grape skins were green-yellow rather than the usual blue-black, due to a natural mutation in a single skin colour gene.[11] Similar mutations appear to have happened in many other grape varieties, such as Pinot Noir and Grenache.

The white Tempranillo grape reproduces asexually through the one unique sarmentum and multiplication. This allows for identical genes, much like a clone. In fact, the genetic similarity between the red and white variety is of 97.8%.[13] Both grapes share identical leaves, clusters and grape form, as well as the short ripening cycles[8] and sensitivity to pests and diseases. The early ripening cycles makes possible its cultivation in any subzone of the Denominatin since the entire cycle can be completed even in the zones where ripening occurs later.[10] The white tempranillo has a medium yield (7500 - 9000 kilograms per hectare),[10] medium to high vine vigor and high alcohol content. Although it has many clusters, they are small and of medium weight.[11] In one example it was reported to have a titratable acidity of 6.9 g/L.[10]

CIDA, once the mutation had stabilized, expanded their collection to 100 vines in 1993, and started to make wine on an experimental scale.[8][11] The first bottling of wine was in 2005, from a hectare of vines planted in 2000.[11][12] It was fermented in stainless steel tanks and aged in oak barrels. The green-tinged wine had discreet aromas of flowers and tropical fruit such as pineapple, refreshing to drink but lacking a little in acidity. [11] White Tempranillo is currently being distributed to growers having been registered with the State[12] and approved for use in the Rioja D.O.Ca.[14]

Separately, and not to be confused with the white mutant strain, the Pago del Vicario winery, in Ciudad Real in La Mancha, is producing an unusual "blanc de noir"-style wine from black tempranillo grapes. The pale steely yellow "Blanco de Tempranillo" is produced by using grapes picked slightly early than their usual harvest time, and minimizing the amount of time the juice is in contact with the skins.

Tempranillo is native to northern Spain and widely cultivated as far south as La Mancha. The two major regions that grow Tempranillo are Rioja in North Central Spain and Ribera del Duero, which lies a little further to the south. Ribera del Duero[15] wine making goes back over 2,000 years as evidenced by the 66-meter mosaic of Bacchus, the god of wine that was unearthed relatively recently at Banos de Valdearados. Substantial quantities are also grown in the Penedes, Navarra and ValdepeÃ±as regions. The grape plays a role in the production of wines in two regions of Portugal, central Alentejo and Douro. In Alentejo Central it is known as Aragonez and used in red table wine blends of variable quality, while in the Douro it is known as Tinta Roriz and mainly used in blends to make port wine.

The varietal is extensively grown in Argentina,[16] Chile, and Mexico[2] where low yield high quality plants produce fine 100% tempranillos like Encino. It was introduced to Uruguay in 1994 by Los Cerros de San Juan Vineyards and Winery, where the first marketable harvest took place in 1999. Fermentation is in American oak barrels.[17] There are also some plantings in Neiba, Dominican Republic.[18]

Tempranillo came to California bearing the name Valdepenas and it was grown in the Central Valley at the turn of the century. Since the climate of the Central Valley was not ideal for the grape, it was hard for the varietal to flourish. It could not reach its true potential and was used as a blending grape for jug wine.[1] California has since started to use this varietal again for fine wines. The grape was introduced in Oregon by Earl Jones of Abacela Vineyards and Winery in the Umpqua Valley.[1] Tempranillo is Abacela's main varietal and it has also been produced in New Mexico, where Tularosa Vineyards was the first winery to label the wine as Tempranillo in 2001.[19] Inwood Estates Vineyards in Texas also has their Cornelious, along with some other blends using Tempranillo.

Tempranillo is also grown in many Australian wine regions including McLaren Vale, the Adelaide Hills, Wrattonbully and in Western Australia. There are now over 200 Australian wineries making wine from this variety.

Tempranillo has recently been introduced by some wine producers in Thailand.

Tempranillo is a black grape with a thick skin.[1] It grows best at relatively high altitudes, but it also can tolerate a much warmer climate.[20] With regard to Tempranillo's production in various climates, wine expert Oz Clarke notes.

In the Ribera del Duero the average July temperature is around 21.4° Celsius (70.5° Fahrenheit),[22] though temperatures in the middle of the day in the lower valley can jump as high as 40 °C (104 °F). At night the region experiences a dramatic diurnal temperature variation with temperatures dropping by as much as 16 °C (30 °F) from the daytime high. The Tempranillo grape is one of the few grapes that can adapt and thrive in continental Mediterranean climates like this.[23]

The lower acidity associated with low-altitude growth is most often remedied by blending with higher acid grapes, such as Graciano in Rioja.[24] Pests and diseases are a serious problem for this grape variety, since it has little resistance to either. The grape forms compact, cylindrical bunches of spherical, purplish black fruit with a colourless pulp. The fruit is very dark in colour and forms a bead-like sphere, hence its Catalan name of Ull de Llebre ("Eye of the Hare").

The tempranillo root absorbs Potassium easily, which facilitates pH levels of 3.6 in the pulp and 4.3 in the peel when it reaches maturity. When it absorbs too much potassium the must is salified (increased levels of salt) which slows the disappearance of malic acid resulting in a higher pH.[25] The peel does not present any herbaceous characters.[25] The grape is very susceptible to inclement weather, contracting when there is a drought and swelling when there is too much humidity. The swelling has a negative effect on quality since it affects the color of the wine. The effects of the weather are attenuated in places with limestone because of the effect of the clay and humidity in the roots; the effects are worse in sandy areas, as well as for vines that are less than twelve years old, as the roots are generally too superficial.[25]

Often making up as much as 90% of a blend, Tempranillo is less frequently bottled as a single varietal. Being low in both acidity and sugar content, it is most commonly blended with Grenache (known as Garnacha in Spain), Carignan (known as Mazuela in Spain), Graciano, Merlot and Cabernet Sauvignon. Blending the grape with Carignan makes a brighter and more acidic wine.[1] Tempranillo is the major component of the typical Rioja blends and constitutes 90-100% of Ribera del Duero wines.[1] In Australia, Tempranillo is blended with Grenache and Syrah. In Portugal, where it is known as Tinta Roriz, it is a major grape in the production of some Port wines.[26]

Some or all of this text has been obtained from Wikipedia, the free encyclopedia. All text is available under the terms of the GNU Free Documentation License Wikipedia is powered by MediaWiki, an open source wiki engine.

The Science of Wine Aroma

About the Acids in Wine

About a wine sommelier

History of Wine and Food Pairing

Science of Food and Wine Pairing

Notes on Food and Wine Pairing from the Experts