"..John's Hopkins scientists expand their 20-year mission to understand the disease-deterring benefits of a potent plant compound found in broccoli...

...In the pale green solutions extracted from those vegetables, Dr. Paul Talalay discovered a compound that demonstrated a powerful ability to protect cells from the sort of damage that can instigate cancer. The compound, sulforaphane, was particularly abundant in broccoli and other cruciferous vegetables, such as cabbage, kale and Brussels sprouts. Sulforaphane was subsequently shown to be especially abundant in sprouted broccoli seeds..."

"...Since then, dozens of journal articles have flowed from the discovery, and sulforaphane is now the subject of weekly journal articles. “I could not have predicted it would have had such a profound scientific influence,” says Talalay..."

August 2018 -- Temporal Efficacy of a Sulforaphane-Based Broccoli Sprout Diet in Prevention of Breast Cancer through Modulation of Epigenetic Mechanisms..'...These results suggest that a temporal exposure to epigenetic-modulating dietary components such as cruciferous vegetables could be a key factor for maximizing chemopreventive effects on human breast cancer....'

6 June 2018 -- Anticancer Activity of Sulforaphane: The Epigenetic Mechanisms and the Nrf2 Signaling Pathway.."...this review, we will discuss the anticancer activities of SFN and its mechanisms, with a particular emphasis on epigenetic modifications, including epigenetic reactivation of Nrf2..."

25 October 2015-- Sulforaphane Protects against Cardiovascular Disease via Nrf2 Activation --"..This review will summarize the evidence from clinical studies and animal experiments relating to the potential mechanisms by which SFN modulates Nrf2 activation and protects against CVD..." 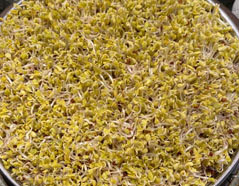 Broccoli Sprouts (above-- easy to grow) is perhaps the most impressive superfood for anti-aging, cognitive effects and preventing and fighting cancer..

Conversion of Glucoraphanin to Sulforaphanes 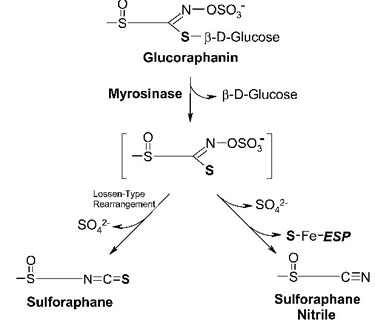