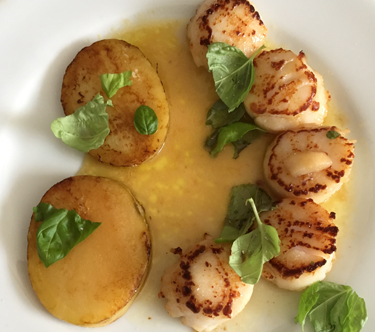 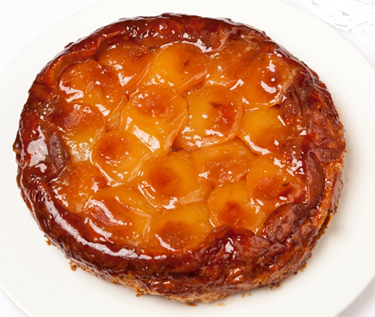 What is brown butter sauce?

Brown butter in French know as Beurre noisette, also referred to as hazelnut butter is a type of warm sauce used in French cuisine. It can accompany savoury foods, such as winter vegetables, pasta, fish such as skate , and chicken. Brown butter is also a critical component in making French pastry -- It is the caramel flavor that gives a tart tatin its wonderful flavor. It is notable for its deep yellow, almost brown color, and nutty scent and flavor from the heating process. While brown butter sauce is one of simplest sauces to make it can also very easy to kill if the heating is taken too far. Brown the butter will take it through several stages from light brown to very dark brown each having a unique flavor. These series of stages results in what some refer to as "The Three Kinds of Brown Butter": a lightly browned butter with mild flavors, a golden brown butter, and a dark brown butter sauce mainly found in baked goods. Note: As the sauce continues to brown with heat more complex flavors develop (read below). The change from one kind of butter to the next happens very quickly though so once the desired color is achieved the butter should be poured off to a different container.

What are the components of butter

80 percent fat, 15 percent water, and 1-2 percent milk protein. Protein in the milk component consist of whey protein and casein. Butter also contains lactose which although at a very small percentage is necessary as a reducing sugar for the maillard reaction to occur (see below). The lipid component of butter is mostly --- and butyric acid a short chain fatty acid.

A review of fatty acid profiles and antioxidant content in grass-fed and grain-fed beef-- A comparison of grain fed vs grass fed cows --"...Grass-based diets have been shown to enhance total conjugated linoleic acid (CLA) (C18:2) isomers, trans vaccenic acid (TVA) (C18:1 t11), a precursor to CLA, and omega-3 (n-3) FAs on a g/g fat basis. While the overall concentration of total SFAs is not different between feeding regimens, grass-finished beef tends toward a higher proportion of cholesterol neutral stearic FA (C18:0), and less cholesterol-elevating SFAs such as myristic (C14:0) and palmitic (C16:0) FAs...". In addition Grass-fed butter is high in butyric acid  which is considered anti-inflammatory.

Butter contains water, milk solids (casein protein and whey protein). Since the fat component of butter have a much higher smoke point than the milk proteins, the browning of butter will be a direct result of the milk protein. The reaction that occurs is called the maillard reaction.

The Maillard reaction (see full article on Maillard Reaction) is a chemical reaction between an amino acid and a reducing sugar, usually requiring the addition of heat. Like caramelization, it is a form of non-enzymatic browning. The reactive carbonyl group of the sugar (in this case lactose) interacts with the nucleophilic amino group of the amino acid (in this case lysine found on the casein molecule). This process accelerates in an alkaline environment because the amino groups do not neutralize. The maillard reaction is the basis of the flavoring industry, since the type of amino acid determines the resulting flavor. In the process, hundreds of different flavor compounds are created. These compounds in turn break down to form yet more new flavor compounds, and so on. Each type of food has a very distinctive set of flavor compounds that are formed during the Maillard reaction. It is these same compounds that flavor scientists have used over the years to create artificial flavors. Maillard reactions generally only begin to occur above 285°F (140°C).

Shown below (image) Lactose and ε-amino groups of lysine residue in milk proteins react non-enzymatically to form the Amadori product by the heating process. The early Maillard reaction is confined to the formation of the protein-bound Amadori product lactulosyllysine. 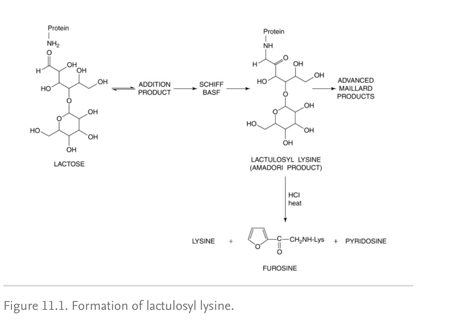 .."The final stage, in which melanoidins (brown pigments) are formed and protein polymerization occurs, is largely unknown from a chemical point of view, let alone quantitatively. The conclusion can only be that not all important compounds are yet identified. .." from Effect of heating on Maillard reactions in milk.

Water Activity -- As water activity approaches 0.70 – in all substances, – the rate of the Maillard reaction and sugar browning peaks. Higher than 0.70, Maillard slows because the reactants are diluted by too much free water.

Caramelization (see full article on Caramelization) is the oxidation of sugar, a process used extensively in cooking for the resulting nutty flavor and brown color. Caramelization is a type of non-enzymatic browning reaction but different than the Maillard Reaction. As the process occurs, volatile chemicals are released producing the characteristic caramel flavor. The reaction involves the removal of water (as steam) and the break down of the sugar. The caramelization reaction depends on the type of sugar.

Crème caramel gets both its colouring and flavour from a combination of caramelization and a “Maillard reaction” since it contains egg and sucrose. The sucrose will caramelize but will also break down into glucose and fructose which are both reducing sugars.

In cooking to produce browning requires an oven temperature high enough to ensure that a Maillard reaction occurs. At higher temperatures, caramelization (the browning of sugars, a distinct process) and subsequently pyrolysis (final breakdown leading to burning) become more pronounced leading to a bitter taste. Some of these bitter compounds are described in this article.

HOW TO MAKE BROWN BUTTER

--Scrape the bottom of the pan to prevent the browning milk proteins from sticking. Note: The foam formed can make it hard to see if the butter is browned.

--when desired color is achieved pour the butter mixture into a heatproof bowl and stir it for one or two minutes to cool it down. Do not leave the butter in the pan since it will continue to cook and burn.

What color do we want the brown butter to be?

Different colors give different flavors and uses --- include photos and descriptions

Also, keep in mind that only the milk solids turn a dark golden brown, not the butter itself. The fat will be darker as well, but not as dramatically as the milk solids.

Serious Eats--effect of pH --"... If you want to make lots of flavor and aroma compounds, just raise the pH a little with baking soda (as Kenji does to make quick-caramelized onions for his Pressure Cooker French Onion Soup). Looking for a crisp, browned crust? Just lower the pH with a little acid, or increase the temperature. Want a little of both? Frying in fats gives you the best of both worlds.---Both the Maillard reaction and caramelization can and do take place in both a steak and a cookie, but they produce markedly different, often complementary, flavors and aromas in each..."

A Study on Advanced Maillard Reaction in Heated Casein/Sugar Solutions: Colour Formation -"..The Maillard reaction in its advanced state was studied with respect to colour formation in milk-resembling model systems (lactose–caseinate or glucose–caseinate solutions), heated between 110 and 150°C. .."

Melanoidins produced by the Maillard reaction: Structure and biological activity

Effect of Heating on the Maillard Reaction

Role of pH in Maillard Reaction

Speeding up the Maillard Reaction -- Kymos