Why dried shitake mushrooms can taste better than fresh --

The two most popular mushrooms in the world are the common button mushroom (Agaricus species) and the shiitake or black forest mushroom (Lentinus edodes). The shiitake, meaning "mushroom of the shii or oak tree" in Japanese, is highly prized in the Orient for its flavor and reputed medicinal value.

Shiitake are native to China but have been grown in both Japan and China since prehistoric times. They have been cultivated for over 1000 years; the first written record of shiitake cultivation can be traced to Wu Sang Kwuang, born during the Song Dynasty (AD 960–1127). However, some documents record the uncultivated mushroom being eaten as early as AD 199. During the Ming Dynasty (AD 1368–1644), physician Wu Juei wrote that the mushroom could be used not only as a food but was taken as a remedy for upper respiratory diseases, poor blood circulation, liver trouble, exhaustion and weakness, and to boost qi, or life energy. It was also believed to prevent premature aging.

CULTIVATION OF THE SHIITAKE MUSHROOM

Before 1982 the Japanese variety of these mushrooms could only be grown in traditional locations using ancient methods. In the late 1970s, Gary F. Leatham published a doctoral thesis based on his research on the budding and growth of the Japan Islands variety; the work helped make commercial cultivation possible worldwide, and Dr. Leatham is now known in the industry as the "Father of Shiitake farming in the USA."

Shiitake are often dried and sold as preserved food in packages. These must be rehydrated by soaking in water before using. Many people prefer dried shiitake to fresh, considering that the sun-drying process draws out the umami flavour from the dried mushrooms by breaking down proteins into amino acids and transforms ergosterol to vitamin D. The stems of shiitake are rarely used in Japanese and other cuisine's, primarily because the stems are harder and take longer to cook than the soft fleshy caps. But using the stems in stocks will greatly enhance the broth.

WHY ARE SUN DRIED SHIITAKE MUSHROOMS RICHER IN FLAVOR?

When Shitake mushrooms and similar mushrooms e.g., Porcini mushrooms are dried in the sun complex proteins are broken down into simpler amino acids (e.g., glutamate) yielding a stronger Umami Flavor. In addition when mushrooms are dried, their guanylate (nucleotide) which also contributes to Umami flavor increases. Read more about Umami as the 5th taste. 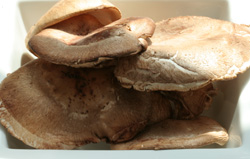 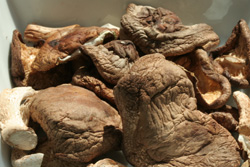