Chemical and Physical Properties of Xanthan Gum in Cooking

Gum is becoming the "go to" hydrocolloid for professional and home cooks. It's easy to use and very powerful in small quantities. Xanthan gum has long been used in the food industry for products such as, ice-cream, salad dressing and sauces and is now available in many food stores. Unlike most starches no heat is necessary for xanthan gum to hydrate. Xanthan gum is a high-molecular weight polysaccharide produced by the microorganism Xanthomonas campestris using microbial fermentation. Xanthan gum is primarily used as a thickener, but is also the most efficient stabilizer for suspensions, emulsions, foams and solid particles in water-based formulations. Xanthan gum derives its name from the strain of bacteria used during the fermentation process, Xanthomonas campestris. X. campestris is the same bacterium responsible for causing black rot to form on broccoli, cauliflower, and other leafy vegetables.

Xanthan gum is a hetero-polysaccharide with a very high molecular weight (between one and several million). Its main chain is made up of glucose units, the backbone being similar to cellulose, with added sidechains of trisacharides (three sugars in a chain). In their solid state xanthan gum molecules have a helical structure. The branches fold in, to lie along the backbone.The side chain consists of alpha-D-mannose that contains an acetyl group, beta-D-glucuronic acid, and a beta-D-mannose terminal unit, linked to a pyruvate group. (See image below). 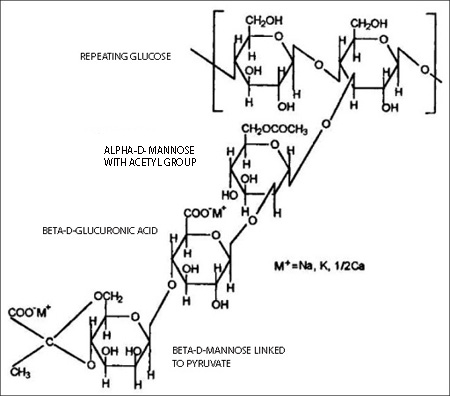 The monosaccharides present in xanthan gum (beta-D-glucose, alpha-D-mannose and alpha-D-glucoronic acid) are found in a ratio of 2:2:1.

The beta-D-glucoses are linked (1->4) to form the backbone similar to cellulose. Alternate glucoses have a short, three-sugar branch consisting of a glucuronic acid sandwiched between two mannose units. Thus, the overall repeating structure is a pentasaccharide. The terminal mannose can have a pyruvate group attached and the mannose adjacent to the main chain may have an acetyl group attached to C6. In general, about one branch in two has a pyruvate group, but the ratio of pyruvate to acetate varies depending on the substrain of Xanthomonas campestris used and the conditions of fermentation. The glucuronic and pyruvic acid groups give xanthan gum a highly negative charge. The presence of anionic side chains on the xanthan gum molecules enhances hydration and xanthan gum soluble in cold as well as hot water.

Xanthan gum soluble in both cold and hot water and is generally not affected by changes in pH value. Xanthan gum will dissolve in most acids or bases. Xanthan gum as is with all hydrocolloids bind water.

The viscosity of xanthan gum is stable at low pH values and at high temperatures for a long period of time and is not affected by the addition of large amounts of salt. Thanks to its water binding capacity, xanthan gum solutions exhibit good freeze/thaw stability.

By itself, xanthan drastically increases the viscosity (thickness) of any liquid it is added to in very low concentrations. In high concentrations, it will form a mucusy paste that looks like a gel but is not technically a gel.

Xanthan gum has a synergistic effect in combination with locust bean gum and konjac (gel formation) as well as with guar gum (higher viscosity). Thanks to the unique rheological and synergistic properties of its aqueous solutions, xanthan gum is used in many applications as a suspending agent and emulsion stabilizer, a foam enhancer or an improver of dough volume.The viscoelasticity between xanthan and locust bean gums is due to the cross-linking between smooth region of locust bean gum and disordered segment of xanthan.

Xanthan gum is one of the most successful hydrocolloids due to its unique functionality, particularly in difficult environments like acid, high salt and high shear stress.

One excellent use of xanthan gum is for sauces since it prevents weeping (syneresis) which is water seeping out from the sauce.

Xanthan gum is also used in gluten-free baking. Since the gluten found in wheat must be omitted, xanthan gum is used to give the dough or batter a "stickiness" that would otherwise be achieved with the gluten.

By increasing the viscosity of liquids, it helps to prevent syneresis (weeping) in gels, keep ice crystals from forming in frozen goods, and help stabilize emulsions and foams. Xanthan is a popular ingredient in gluten-free foods because it can impart some of the texture that gluten gives to baked goods.

How much xanthan gum should be used?

The greater the weight ratio of xanthan gum added to a liquid, the thicker the liquid will become. In general, 0.2% by weight of xanthan gum results in slight thickening. A thicker sauce is obtained with 0.7–1.5% xanthan gum. Too much xanthan gum can result in an unpleasant and undesirable slimy texture.

Xanthan gum is described by many chefs as the most versatile of the hydrocolloids. It is very easy to use use in either cold or hot applications and only a very small amount is needed. Unlike most starches it does not require heat to be hydrated which make it ideal for all sauces.. Xanthan gum is also very stable over a wide range of temperatures, in various acid, alkaline and salty mixtures.

In molecular gastronomy it is widely used for spherification, to suspend solids in liquids thanks to its elasticity, for thickening sauces without altering the mouth feel, for gas retention in liquids, and to help stabilize emulsions and foams.

Effect of xanthan structure on its interaction with locust bean gum: Toward prediction of rheological properties

PolySac3DB: an annotated data base of 3 dimensional structures of polysaccharides

Functionality of Xanthan Gum -- a biopolymer