Science behind the perfect French Omlette

WHAT IS A CLASSIC FRENCH OMLETTE?

There are many different ways to cook and omlette. Spain, Janpan, France and many other countries have their own styles of making and omlette This page deals primarily with the "Classic French Omlette". While from the videos it appears quite simple to make a perfect onlette -- smooth on the outside and perfext center-- it is atually quite diffiiclut and takes a lot of pratice.

According the Julia Child what makes a great French style omlette is "how fast you cook it". An omleete should cook in 20 seconds, she says. The best omlettes she says are made out of 2-3 eggs. She prefered to use a 7-71/2 diameter non-stick pan. Eggs must be really beatena up but just enough to blend all the yolks and whites. Start the eggs in a very hot pan and melt the butter adding the eggs just before butter browns. Key to her technqiue is major shaking and turning of the pan. See video below for technique. The final omlette should be smooth fluffy and consistent.

Julia Childs second method is what she calls a scrambled omlette, where the back of a fork scrambles the egg. She does however prefer the shaking methods although it does take a bit of practice to perfect this technique.

Jacque Pepin uses a rapid motion similar to Julia Child but use the back of the fork to to provide the rapid motion of the eggs. His classic french omlette contains tarragon, chives, chervil and parsley.

WHY IS A RAPID MOTION NECESSARY TO MAKE A PERFEDT OMLETTE? 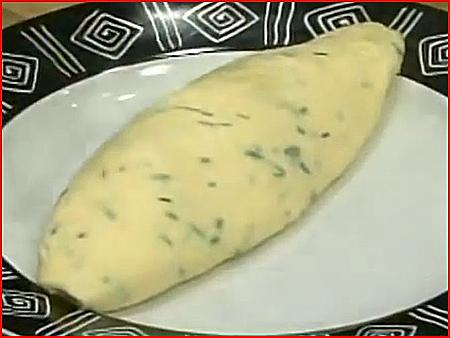 Eggs start to curdle at 160F. At that point the omleete will begin to toughen. Keeping the eggs moving will reduce the temperatrue as well as blend the egg mixture. The technique is bascially similar to the way Gordon Ramsay cooks perfect scrambled eggs, constantly stirring the egg and going off and on the heat to keep a creamy consistenty. This is the key to a classic style French omlette. Other styles of omlettes allow some browing to occur as is shown in Jacque Pepins first method in the video.

Why must the omlette mixture be well stirred? Egg yolk and egg white coagulate at different temperatures. By properly blending the yolk and white you will attain a more creamy consistency as the eggs cook.

It's in the Wrist: Mastering the Omelette

How to Perfect the French Omelet (Hint: There Will Be Butter)

Unbeatable: The art of making a perfect omelette

Science of Cooking with Eggs