Angus cattle(Aberdeen Angus) are a breed of cattle much used in beef production. They were developed from cattle native to the counties of Aberdeenshire and Angus in Scotland,[1] and are known as Aberdeen Angus in most parts of the world.

They are naturally polled (do not have horns) and solid black or red, although the udder may be white. There have always been both red and black individuals in the population,[2] and in the USA they are regarded as two separate breeds - Red Angus and Black Angus. Black Angus is the most popular beef breed of cattle in the United States, with 324,266 animals registered in 2005.[3][4] 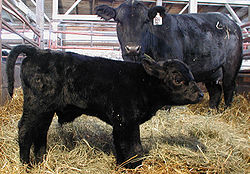 Angus calf with its mother

For some time before the 1800s, the hornless cattle in Aberdeenshire and Angus were called Angus doddies. Hugh Watson can be considered the founder of the breed; he was instrumental in selecting the best black, polled animals for his herd. His favorite bull was Old Jock, who was born 1842 and sired by Grey-Breasted Jock. Old Jock was given the number "1" in the Scottish Herd Book when it was founded. Another of Watson's notable animals was a cow, Old Granny, which was born in 1824 and said to have lived to 35 years of age and to have produced 29 calves. The pedigrees of the vast majority of Angus cattle alive today can be traced back to these two animals.[5] 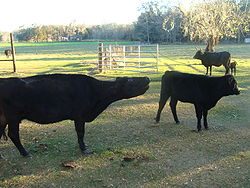 A black Angus cow bellowing on a farm in central Florida

On May 17, 1873, George Grant brought four Angus bulls to Victoria, Kansas. He took the bulls to the fair in Kansas City where they were the topic of much conversation at a time when Shorthorns and Longhorns were the norm. The black hornless animals were often called "freaks" by those who saw them. The bulls were used only in crossbreeding and have no registered progeny today. However, their offspring left a favorable impression on the cattlemen of the time and soon more Angus cattle were imported from Scotland to form purebred herds.[6]

On November 21, 1883, the American Aberdeen Angus Association was founded in Chicago, Illinois,[7] but the organization's name was shortened in the 1950s to the American Angus Association. The Association's first herd book was published on March 1, 1885.[6] At this time both red and black animals were registered without distinction. However, in 1917 the Association barred the registering of red and other colored animals in an effort to promote a solid black breed.[8] Red Angus cattle occur as the result of a recessive gene. Breeders collecting red cattle from black herds began the Red Angus Association of America in 1954. Other countries such as the United Kingdom and Canada still register both colors in the same herd book.

From 2008 to 2010, The American Angus Association discovered several genetic disorders in the breed referred to as "AM," "NH" and "CA." A test for dwarfism was discovered several years before 2008. All cattle breeds, in fact all living organisms, carry genetic disorders, and Angus cattle are no exception. A very small number of Black Angus, some Red Angus, Holsteins, Simmental and Hereford as well as humans carry OS also known as Osteopetrosis or "Marble Bone." [9]

The four recessive defects can produce affected calves. A "recessive defect" requires both parents to carry the recessive gene to have a calf that is "affected" or shows the defect, and then only an average of one in four will show the defect even with both parents carrying the defective gene. The four recessive defects that can be tested for in the Black Angus breed are: Arthrogryposis Multiplex (AM) referred to as curly calf; Neuropathic Hydrocephalus (NH) sometimes known as water head; Contractural Arachnodactyly (CA) formerly referred to by the name of â€œFawn Calf Syndrome;" and dwarfism. DNA testing is now available for AM, NH, CA and one type of dwarfism. AM, CA and dwarfism are not deadly to the calf; however, calves affected with any one of these defects may be easier prey to predators and may also live a shortened life due to other complications. An affected NH calf will generally be born dead; however, an affected calf with this defect is very serious because the mother cow can die during an unsupervised birth, or she may require a cesarean section due to the enlarged head of the calf. However, both parents need to carry the recessive gene for any calf to be affected. [10][11][12]

Because of these defects, the American Angus Association has chosen to remove the carrier animals from the breed and has instituted a somewhat involved program to remove the defective animals, but especially their offspring, from the breed. The American Angus Association has made rules to govern AM, NH and CA so that by January 1, 2012 for AM, and June 15, 2012 for NH, no Angus will be registered that is a carrier. After that time, owners may use carrier bulls or carrier cows in their own herds but cannot register offspring unless the offspring are tested defect free. This extended time period allows breeders to recover their registered herds by replacing carrier mothers with non-carrier daughters. An animal designated as a carrier of dwarfism will not have offspring registered. Because the American Angus Association and the members have elected to fix the problems rather than ignore them, in a few, short years, there will be no registered calves with these defects.

Angus cattle are widely used in crossbreeding to reduce the likelihood of dystocia (difficult calving). They are also used as a genetic dehorner as the polled gene is passed on as a dominant trait.[13]

During the latter part of 2003 and the early part of 2004, the American fast food industry assisted in a public relations campaign to promote the supposedly superior quality of beef produced from Angus cattle . Back Yard Burger was the first such large scale product sold in the US, dating back to 2002.[14] Angus burgers are also menu items for chains such as Hardee's and Canadian-based Harvey's. Beginning in 2006, McDonalds began testing hamburgers made with Angus beef at a number of its restaurants in several regions in the US; the company said that customer response to the burgers was positive[15] and began selling the burger at all US locations in July 2009.[16] At the same time, McDonald's Australia also began selling two variants of the burger, the Grand Angus and the Mighty Angus, using Australian-bred Angus, in their outlets.[17]

The American Angus Association set up the "Certified Angus Beef" brand in 1978. The goal of this brand was to promote the idea that Angus beef was of higher quality than beef from other breeds of cattle. Cattle are eligible for "Certified Angus Beef" evaluation if they are at least 51% black and exhibit Angus influence, which include black Simmental cattle and crossbreds. However, they must meet all 10 of the following criteria, which were refined in January 2007 to further enhance product consistency, to be labeled "Certified Angus Beef" by USDA Graders:[18]

What is Sous Vide Cooking

Science of Hydrocolloids in Cooking