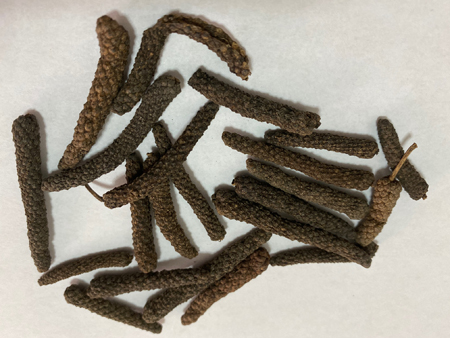 Long pepper (Piper longum), sometimes called Indian long pepper or pipli, is a flowering vine in the family Piperaceae, cultivated for its fruit, which is usually dried and used as a spice and seasoning.

Long pepper has a taste similar to, but hotter and more complex than, that of its close relative Piper nigrum – from which black, green and white pepper are obtained.

The fruit of the pepper consists of many minuscule fruits (see image above)– each about the size of a poppy seed – embedded in the surface of a flower spike.

Like Black Pepper (Piper nigrum), the fruits contain the alkaloid piperine, which contributes to their pungency. Another species of long pepper, Piper retrofractum, is native to Java, Indonesia. 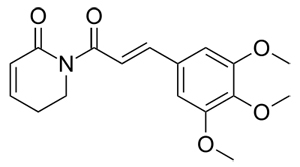 Piperlongumine is a natural product constituent of the fruit of the Long pepper (Piper longum), a pepper plant found in southern India and southeast Asia.

Overview of Piperlongumine in Aging and Senescence

Piperlongumine (PL) is one of a few natural products identified to have the ability to selectively kill SCs . Compared to other known senolytic agents, piperlongumine has the advantage of low toxicity, an excellent PK/PD profile, and oral bioavailability. This natural compound has been calling attention of scientific community because of its biological activities such as antitumor, antimetastatic, antiplatelet aggregation and anxiolytic.


Bioavailability of Piperlongumine and search for Analogs

Piperlongumine (PPL) has presented a variety of important pharmacological activities. In recent pharmacokinetics studies in rats, this molecule reached 76.39% of bioavailability. see abstract below: Details of the cooperative binding of piperlongumine with rat serum albumin obtained by spectroscopic and computational analyses

Accumulating evidence indicates that senescent cells play an important role in many age-associated diseases. The pharmacological depletion of senescent cells (SCs) with a “senolytic agent”, a small molecule that selectively kills SCs, is a potential novel therapeutic approach for these diseases. Recently, we discovered ABT-263, a potent and highly selective senolytic agent, by screening a library of rationally-selected compounds. With this screening approach, we also identified a second senolytic agent called piperlongumine (PL). PL is a natural product that is reported to have many pharmacological effects, including anti-tumor activity. We show here that PL preferentially killed senescent human WI-38 fibroblasts when senescence was induced by ionizing radiation, replicative exhaustion, or ectopic expression of the oncogene Ras. PL killed SCs by inducing apoptosis, and this process did not require the induction of reactive oxygen species. In addition, we found that PL synergistically killed SCs in combination with ABT-263, and initial structural modifications to PL identified analogs with improved potency and/or selectivity in inducing SC death. Overall, our studies demonstrate that PL is a novel lead for developing senolytic agents. Keywords: piperlongumine, aging, senescent cells, senolytic agents, ABT-263, reactive oxygen species, synergistic effect. see full publication

"...Piperlongumine (PPL) has presented a variety of important pharmacological activities. In recent pharmacokinetics studies in rats, this molecule reached 76.39% of bioavailability. Although PPL is present in the bloodstream, no information is found on the interaction between PPL and rat serum albumin (RSA), the most abundant protein with the function of transporting endo/exogenous molecules. In this sense, the present study elucidated the mechanism of interaction between PPL and RSA, using in conjunction spectroscopic and computational techniques. ...The molecular docking described the microenvironment of the interaction sites, rich in apolar residues. The stability of the RSA-PPL complex was checked by molecular dynamics..." see full publication

"...Selective clearance of senescent cells (SCs) has emerged as a potential therapeutic approach for age-related diseases, as well as chemotherapy- and radiotherapy-induced adverse effects. Through a cell-based phenotypic screening approach, we recently identified piperlongumine (PL), a dietary natural product, as a novel senolytic agent, referring to small molecules that can selectively kill SCs over normal or non-senescent cells. In an effort to establish the structure-senolytic activity relationships of PL analogues, we performed a series of structural modifications on the trimethoxyphenyl and the α,β-unsaturated δ-valerolactam rings of PL. We show that modifications on the trimethoxyphenyl ring are well tolerated, while the Michael acceptor on the lactam ring is critical for the senolytic activity. Replacing the endocyclic C2-C3 olefin with an exocyclic methylene at C2 render PL analogues 47-49 with increased senolytic activity. These α-methylene containing analogues are also more potent than PL in inducing ROS production in WI-38 SCs. Similar to PL, 47-49 reduce the protein levels of oxidation resistance 1 (OXR1), an important oxidative stress response protein that regulates the expression of a variety of antioxidant enzymes, in cells. This study represents a useful starting point toward the discovery of senolytic agents for therapeutic uses...