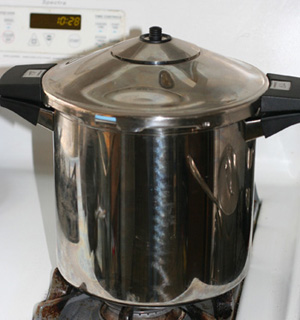 Pressure cooker image is that of a Kuhn Rickon

Pressure (symbol: P) is the force per unit area applied in a direction perpendicular to the surface of an object. The SI unit for pressure is the pascal (Pa), equal to one Newton per square meter (N/m2 or kg·m-1·s-2). Non-SI measures such as pound per square inch (psi) and bar are used in parts of the world. The cgs unit of pressure is the bar (ba), equal to 1 dyn·cm-2.

Example: A woman steps on you foot with a flat shoe one day... not too much pain. The next day she steps on your foot wearing a pointed high heel shoe... now much pain. Her weight did not change but the area where the force applied decreased substantially. Since pressure P is defined as Force/Area the pressure applied to the area of the foot is much higher.

This description of pressure helps explain why in the case of pressure cookers it does not take much weight (or force of a spring) to control the pressure when a small hole used.

The first pressure cooker appeared in France in 1679 introduced as Papin’s Digester, named for its inventor, the French-born physicist Denis Papin. The cooker heated water to produce very hot steam which forced the temperature inside the pot as high as 266° F (130° C), higher than today's kitchen pressure cookers.

The first commercial pressure cooker debuted in the United States at the New York World's Fair in 1939, made by National Presto Industries. It's defined as a saucepan with a locking lid that creates within intense steam heat to cook foods in a shorter period of time than a conventional saucepan.

Then someone came up with the idea of making large (50 gallon) pressure cookers to be used for cooking by large businesses and institutions such as hotels, restaurants and schools. The first US pressure cooker patents were issued in 1902. The term 'pressure cooker' first appeared in print in 1915 and by 1917 the US Department of Agriculture determined that pressure canning was the only safe method of preserving low acid foods and meats without risking food poisoning

Then in 1939 the company introduced the first saucepan-style pressure cooker and gave it the trade name 'Presto 'to signify the speed of pressure-cooking. The 'Presto 'brand soon became synonymous with pressure-cooking and eventually the company changed its name to 'National Presto Company's which you probably know today simply as the Presto Company. In 1945 they introduced the first truly home-use pressure cooker which, at 4 quarts, was big enough to cook a meal but small enough to be manageable by the average housewife

How do Pressure Cookers Work?

Normally water will boil at 212F (100C) at sea level Atmospheric pressure at 1,01325 bar, i.e. normal atmospheric pressure on the sea level at 0°C --'in an open system'. At this temperature liquid water turns to gas. Applying more heat to an open pot of water will only increase the rate that liquid water turns to vapor but will not increase the temperature of the liquid.

The Ideal gas law is the equation of state of a hypothetical ideal gas. It is a good approximation to the behavior of many gases under many conditions, although it has several limitations. Still it simply shows how at constant volume increasing pressure will increase the temperature of the gas.

The ideal gas law does not however take into account the behavior of real fluids -- the nonzero size of molecules and the attraction between them. For this one must use the van der Waals equation derived by Johannes Diderik van der Waals in 1873, who received the Nobel prize in 1910 for "his work on the equation of state for gases and liquids". These equations predict the behavior of both gas and liquid states which exist within the pressure cooker.

The Maillard Reaction is what causes food to brown and gives that nice flavor. While the Maillard reaction can even take place at room temperature it starts to take off at temperatures above 250F. So there should be a greater amount of Maillard reaction occurring during pressure cooking than normal simmering of stocks and stews. This is clearly verified when viewing and tasting stocks cooked using a pressure cooker.

-- takes time to heat liquid and time for pressure to be released so foods that cook within 15 minutes does not really save time.
-- cooks using water so foods that benefit by high heat (maillard reaction) will not produce desirable effects
--everything has to be cooked at the same time
--care must be taken when pressure is released
--while some Maillard reaction occurs food still has a steamed taste unless sufficient browning is done before or after cooking,

What foods are best cooked using a pressure cooker?

Braising tough cuts of meat -- When cooking meat make sure to sear the meat first just as you would do when braising. 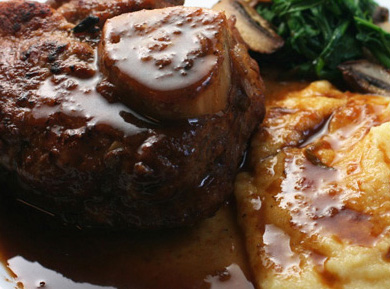 Above image: Osso Bucco is very soft and succulent after only being cooked for 40 minutes in a pressure cooker at 15 psi. The meat was brushed with sauce and slightly glazed under the broiler before serving...

Beans --Pressure cooking beans is fast and easy, but it's important to add oil when doing so to keep the beans from foaming up as well as keeping the skins from popping. Beans can have a tendency to clog the air vents so be sure to clean properly after cooking beans.

Artichokes -- Making artichokes using a pressure cooker is fairly simple, and they come out perfectly cooked and very delicious.

Stocks -- According to Heston Blumenthal of the Fat Duck --..."at the Fat Duck we've just started using a brilliant gadget to make stocks. It's not exactly cutting-edge - it's the humble pressure cooker - but it makes stock better and quicker than any other method I know of..." See our recipe for duck stock which we use a pressure cooker for 1 1/2 hours.

Under cooking and over cooking foods with the pressure cooker.

One of the problems you will encounter if just starting with a new pressure cooking is the times used to cook food. It is best therefore to abide by the times recommended by the manufacturer since pressure cookers will vary from one to another. A good rule of thumb is it is better to undercook than overcook since you can always increase time.