A sugar substitute, or artificial sweetener, is a food additive which attempts to duplicate the effect of sugar or corn syrup in taste, but often with less food energy.

An important class of sugar substitutes are known as high intensity sweeteners. These are compounds whose sweetness is many times that of sucrose; accordingly, much less sweetener is required and energy contribution often negligible. The sensation of sweetness caused by these compounds (the "sweetness profile") is sometimes notably different from sucrose, so they are used in complex mixtures that achieve the most natural sweet sensation.

If the sucrose (or other sugar) replaced has contributed to the texture of the product, then a bulking agent is often also needed. This may be seen in soft drinks such as soda labeled as "diet" or "light" which contain artificial sweeteners and often have notably different mouthfeel; or in table sugar replacements which mix maltodextrins with an intense sweetener to achieve satisfactory texture sensation.

In the United States, five artificially derived sugar substitutes have been approved for use. They are saccharin, aspartame, sucralose, neotame and acesulfame potassium. These compounds are all high intensity sweeteners. There is ongoing controversy whether artificial sweeteners are health risks. Some studies show that they cause disease in laboratory rats. ---The majority of sugar substitutes approved for food use are artificially synthesized compounds. However, some natural sugar substitutes are known including sorbitol and xylitol, which are found in berries, fruit, vegetables and mushrooms. (Although natural, they may be produced synthetically in bulk food production, to lower production costs.) Other natural substitutes are known but are yet to gain official approval for food use.

Another important group of non-sugar sweeteners are the polyols. These are generally less sweet than sucrose, but have similar bulk properties and can be used in a wide range of food products. Sometimes the sweetness profile is 'fine-tuned' with high intensity sweeteners as described above. As with all food products the development of a formulation to replace sucrose is a complex process.

The reason is very simple: although the profit margins on artificial sweeteners are extremely high for the manufacturers, they still cost the food industry just a fraction of the cost of sugar and corn syrup. Corn syrup was introduced by the industry as a low-cost alternative to sugar. So it's not surprising that the food industry is promoting its "diet" or "light" products heavily, thus moving the customers over to its more profitable, artificially sweetened products.

Aspartame is currently the most popular sweetener in the US food industry, as the price has dropped significantly since the Monsanto patent expired in 1992. However, sucralose may soon replace it, as alternative processes to Tate & Lyle's patent seem to be emerging. According to Morgan Stanley, this can mean that the price of sucralose will drop by 30%. [2]

Reasons why individuals use sugar substitutes

There are three main reasons why individuals use a sugar substitute:

However, changing the food energy intake from one food will not necessarily change a person's overall food energy intake, or cause a person to lose weight. No published study has shown this. One study [3] on WebMD, by the University of Texas Health Science Center at San Antonio, actually showed the opposite, where those who consumed diet soda were more likely to gain weight than those that consumed naturally sweetened soda. However, this study only contains data limited to soda sweetened with aspartame. It is not known if the same results will appear in baked goods and other products sweetened with saccharin, sucralose, or other sugar substitutes.

There is ongoing controversy over the supposed health risks of artificial sweeteners such as saccharin and aspartame. Some studies have shown that they cause brain tumors as well as lymphatic cancers in laboratory animals. Multiple scientific studies have demonstrated health risks of saccharin to humans. The U.S. Food and Drug Administration (FDA) determined in 1981 that aspartame is safe to use in foods, but only after it was denied for many years. It has also ruled that all products containing aspartame must include a warning to phenylketonurics that the sweetener contains phenylalanine (as do many foods).

In the United States, the FDA banned the sale of cyclamate in 1970 after lab tests indicated that large amounts of cyclamates caused bladder cancer in rats (a disease which rats are particularly susceptible to, also caused by drinking sugar water[citation needed]). The findings of these studies have been challenged and some companies are petitioning to have cyclamates reapproved. Cyclamates are still used as sweeteners in many parts of the world. They are used with official approval in over 55 countries.

Saccharin was the first artificial sweetener and was originally synthesized in 1879 by Remsen and Fahlberg and its sweet taste was discovered by accident. It had been created in an experiment with toluene derivatives. A process for the creation of saccharin from phthalic anhydride was developed in 1950 and currently saccharin is created by this process and the original process by which it was discovered. It is 300-500 times as sweet as sugar (sucrose) and is often used to improve the taste of toothpastes, dietary foods, and dietary beverages. The bitter aftertaste of saccharin is often minimized by blending it with other sweeteners.

Fear about saccharin increased when a 1960 study showed that high levels of saccharin may cause bladder cancer in laboratory rats. In 1977, Canada banned saccharin due to results from animal research. The FDA in the United States considered banning saccharin in 1977, but Congress stepped in and placed a moratorium on such a ban. The moratorium required a warning label and also mandated further study of saccharin safety.

Subsequently, it was discovered that saccharin causes cancer in male rats by a mechanism not found in humans. At high doses, saccharin causes a precipitate to form in rat urine. This precipitate damages the cells lining the bladder ("urinary bladder urothelial cytotoxicity") and a tumor forms when the cells regenerate ("regenerative hyperplasia"). According to the International Agency for Research on Cancer, part of the World Health Organization, "Saccharin and its salts was downgraded from Group 2B, possibly carcinogenic to humans, to Group 3, not classifiable as to carcinogenicity to humans, despite sufficient evidence of carcinogenicity to animals, because it is carcinogenic by a non-DNA-reactive mechanism that is not relevant to humans because of critical interspecies differences in urine composition." In 2001, the United States repealed the warning label requirement (the threat of an FDA ban had already been lifted in 1991). Most other countries also permit saccharin but restrict the levels of use, while other countries have outright banned it.

Aspartame was discovered in 1965 by James M. Schlatter at the G.D. Searle company (later purchased by Monsanto). He was working on an anti-ulcer drug and spilled some aspartame on his hand by accident. When he licked his finger, he noticed that it had a sweet taste. It is an odorless, white crystalline powder that is derived from the two amino acids aspartic acid and phenylalanine. It is about 200 times as sweet as sugar and can be used as a tabletop sweetener or in frozen desserts, gelatins, beverages, and chewing gum. Its chemical name is L-alpha-aspartyl-L-phenylalanine methyl ester and its chemical formula is C14H18N2O5. Though it has no bitter aftertaste like saccharin, its drawback is that it might not taste exactly like sugar because it reacts with other food flavors. When eaten, aspartame is metabolized into its original amino acids and has a relatively low food energy.

Initial safety testing suggested that aspartame caused brain tumors in rats; as a result, the additive was held up in the United States for many years in the FDA's approval process. In 1980, the FDA convened a Public Board of Inquiry (PBOI) consisting of independent advisors charged with examining the purported relationship between aspartame and brain cancer. The PBOI's conclusions were unclear whether aspartame causes brain damage, and recommended against approving aspartame at that time, citing unanswered questions about cancer in laboratory rats. In 1981, FDA Commissioner Arthur Hull Hayes, newly appointed by President Ronald Reagan, approved aspartame as a food additive. He was closely associated with the artificial sweetner industry having several close friends, most notably Donald Rumsfeld, former United States Secretary of Defense, and then the CEO of G.D. Searle. Hayes cited data from a single Japanese study that had not been available to the members of the PBOI, as his reason for approval. [4]

Since the FDA approved aspartame for consumption, some researchers have suggested that a rise in brain tumor rates in the United States may be at least partially related to the increasing availability and consumption of aspartame. [5], [6] However, more recent research, some of it supported by companies producing artificial sweeteners, has failed to find any link between aspartame and cancer or other health problems. [7], [8]

One of the many hypotheses about the causes of Gulf war syndrome is that soldiers, after drinking gallons of aspartame-containing soft drinks in the extreme heat, accumulated toxic doses of methanol, formaldehyde, diketopiperazine and formic acid from the breakdown of the sweetener into its component molecules. However, the symptoms do not greatly resemble those of classic methanol poisoning, and the body, in its normal metabolism, produces methanol in quantities comparable to or greater than would be ingested via aspartame, so this theory does not have wide support.

Sucralose is a modified sugar compound that is about 600 times as sweet as sugar. It is produced from sucrose when three chlorine atoms replace three hydroxyl groups (OH). This modified molecule can be used in beverages, frozen desserts and gum. Unlike the others, it is stable in heat and can be used in baked and fried goods. Sucralose is minimally absorbed by the body and passes out unchanged.

The first significant rumblings were in 2000, when osteopathic physician Joseph Mercola wrote an article entitled "The Secret Dangers of Splenda (sucralose), an Artificial Sweetener", primarily concerning the lack of long-term studies on sucralose. Since then, many others have chimed in.

In December of 2004, five separate false advertising lawsuits were filed against chemical sweetener manufacturer Johnson & Johnson/McNeil for claims made about its artificial sweetener Splenda.

On January 10, 2005, the "Truth About Splenda" website was created by The Sugar Association, an organization representing sugar beet and sugar cane farmers in the United States, in an effort to educate the public on their views.

Sucralose is of a class of chemicals called organochlorines, many of which are highly toxic and known carcinogens, however, sucralose is extremely insoluble in fat and does not accumulate in fat; it also does not break down or dechlorinate [1].

The three primary compounds used as sugar substitutes in the United States are:

In many other countries cyclamate and the herbal sweetener stevia are used extensively.

Note that because many of these have little or no food energy, comparison of sweetness based on energy content is not meaningful.

The three primary compounds used as sugar substitutes in the United States are: 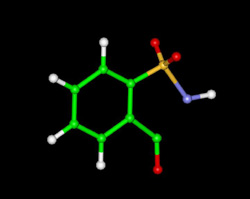 Saccharin (e.g. Sweet'N Low). Saccharin is about 300 times as sweet as sugar. 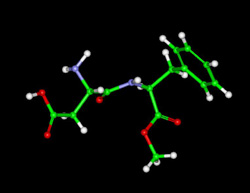 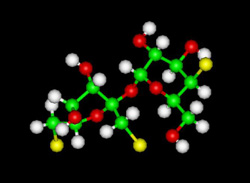 Sucrose-- (Not an artificial sweetener and not to be confused with sucralose). Commonly called table sugar, also called saccharose is a disaccharide (glucose + fructose) with the molecular formula C12H22O11.