What is the difference between male and female zucchini blosoms

Zucchini plants produce male and female flowers on the same plant and for the plants to produce fruit, insects must visit both flowers, taking the pollen from male flowers and transferring it to the female flower. The absence of ideal conditions for pollination and for setting fruits may cause the flowers to fall off before the zucchini develops.

Male flowers are the first to appear on zucchini plants, opening before female flowers. The anatomy of male and female flowers differs. The pollen-producing parts of the male flower are the anthers and filaments located on the stamen. These are often fused together. Male flowers often open, release the pollen and then fall off. Female flowers must remain on the plant until the zucchini starts to grow, and this can only happen when pollination is successful. Without pollination, female flowers fall off and plants won't produce any fruit.

Female blossoms are connected to the fruit (see images below). Male blossoms have a long, thin stem. 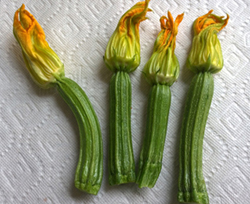 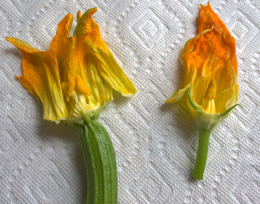 Above --Female zucchini blossoms are directly attached to the fruit (left). Male blossom are attached to a long stem (right)

Look behind the flower for a swollen base. Flowers with the swollen base are female, as this is the ovary that later develops into the zucchini after germination. 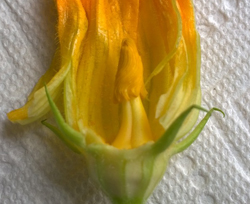 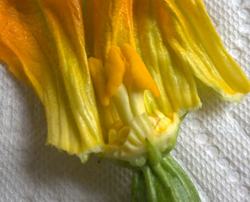 Above--Top/Left Male Zucchini blossom showing the stamen. Only the male blossom has a stamen in the center of the flower. The pollen on the stamen is what polinates the female plant. (Above/Right) The female internals (pistil) are more complex with the stigma (top bulb structures) and ovary below

Find the stamen in the center of suspected male blossoms. Male flowers have a single, long stamen that is covered in pollen, while female blossoms have a stigma with multiple stems inside (see images above).

Only female squash blossoms mature into a squash. The male is just there to fertilize them. The male blossoms outweigh and outnumber the female flowers.

Not enough light causes poor fruit set. Most fruiting vegetables do best in full sun all day --- they need at least 6 to 8 hours of sunlight Also extremely hot temperatures during flowering above 85 degrees can reduce fruit set.

For best fruit production pollinate the zucchini flowers yourself early in the morning before the flowers close. The easiest way I've found is to cut a male flower from the plant, carefully remove the petals leaving the stamen intact, and then dab the stamen directly into the center of a female flower. Of course if you have plenty of bees or other beneficial insects around the garden, they will take care of pollination for you! Don't be discouraged at first if all you find are male flowers. Many times squash plants produce more males early in the season.

You can really intesify flavor by dehyrating zucchini blossoms. Dehydrated blossoms also provide a great garnish. We dehydrate blossoms in September and then vaccum pack them so they last through the winter till the next season. 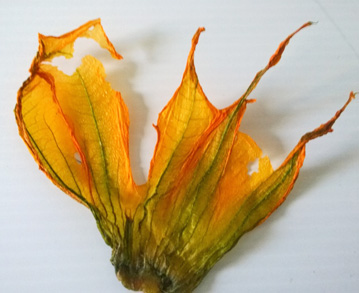 Grow your own Squash --Growing squash is an exciting journey. Unlike root crops that grow underground, here you can watch the growing squash slowly emerge and swell. They are also pleasingly easy to grow.

How to Dehydrate Zucchini Blossoms for Storage and Cooking

How to Freeze Zucchini Flowers