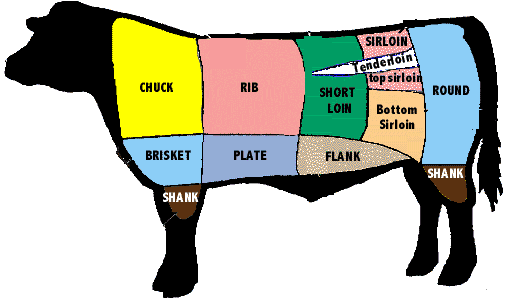 Common cuts of beef. -- Know your cuts of Beef

Beef is meat obtained from a bovine.

Beef is a taboo meat in a number of religions, most notably Hinduism. Also, consumption of beef (along with other meats) is frowned upon by many Buddhists, although it is not strictly taboo.

By contrast, beef is one of the principal meats used in European cuisine and cuisine of the Americas, and is important in Africa, East Asia, and Southeast Asia as well.

Beef can be cut into steak, pot roasts, short ribs, or ground into hamburger. Several Asian and European nationalities include the blood in their cuisine as well -- the British use it to make black pudding, and Filipinos use it to make a stew called dinuguan. Other beef variety meats include the tongue, which is usually sliced for sandwiches in Western cooking; tripe from the stomach; various glands—particularly the pancreas and thyroid—referred to as sweetbreads; and the tender testicles of the bull commonly known as "beef balls", "calf fries", or "Rocky Mountain oysters."

The better cuts are usually obtained from steers, as heifers tend to be kept for breeding. Older animals are used for beef when they are past their reproductive prime. The meat from older cows and bulls is generally tougher, so it is frequently used for ground beef. Cattle raised for beef may be allowed to roam free on grasslands, or may be confined at some stage in pens as part of a large feeding operation called a feedlot.

The United States, Brazil, the EU, China, and India, are the world's five largest producers of beef. Beef production is also important to the economy of Argentina, the Russian Federation, Australia, Mexico, and Canada.

In the United States, the USDA operates a voluntary beef grading program. The grades are based on two main criteria, the degree of marbling, or fat, in the beef and the age of the carcass. The younger and more marbled receive the better grades. The more tender and juicy better grades are used by restaurants and hotels and also, except for Prime, sold in supermarkets. The lower grades are used for processing or may be sold as ungraded ground beef. The USDA quality grades are as follows:

(This section denotes the American system of beef cutting. Other cultures have similar systems, but the exact cuts and terminology differ).

Beef is first divided into primal cuts. These are basic sections from which steaks and other subdivisions are cut. The following is a list of the primal cuts, ordered front to back, then top to bottom. The short loin and the sirloin are sometimes considered as one section. --

Short Loin - the most tender, and the most expensive --can be prepared without the aid of moist heat or long cooking times. Cuts from the short loin may be sautéed, pan fried, broiled, pan broiled or grilled.-

Sirloin is less tender than short loin, but more flavorful. Sirloin is found in the area of the hipbone. These tender cuts respond well to sautéing, pan-frying, broiling, pan-broiling or grilling. e.g., sirloin steaks which are available in a variety of boneless and bone-in steaks and sirloin tip roast which are excellent when dry roasted or marinated

The round is part of the hip muscle and consists of lean meat well suited to long, moist cooking methods. Top Round is the most tender part of the round and can be prepared as pot roast or cut into thick steaks for braised dishes. Rump Roast is considered a very popular cut for pot roast, but can also be roasted at low temperatures.

In Europe, the English are particularly associated with beef-eating, which is why the French call them les rosbifs (roast beefs). In fact, according to research carried out by the Museum of London amongst Roman rubbish dumps in London, it seems that the English acquired their first taste of roast beef from the Roman military as the city expanded under their occupation. Despite this, it seems not to have become popular amongst the population in general until the Middle Ages or later, and only became a 'national caricature' in the 18th century. (Observer Aug 6, 2000). Despite this image, England today has more vegetarians and semi-vegetarians, in percentage terms, than any other Western country.

For cooking beef to the proper temperature see: IMPORTANT TEMPERATURES IN COOKING MEAT

The over-intensive farming of beef resulted in the world's first recognised outbreak of bovine spongiform encephalopathy (BSE or, colloquially, "mad cow disease") in the United Kingdom in 1986. Eating beef from cattle with BSE is thought to have caused the new variant of Creutzfeldt-Jakob disease (nvCJD) in about 131 cases (2003 June data) in the United Kingdom and some few in France. The perception of beef as potentially lethal caused significant damage to the UK beef industry. The attempts to wipe out BSE in the UK by a kill-and-burn campaign, although ultimately successful, did further damage from which the beef industry is only recently recovering. Since then, a number of other countries have had outbreaks of BSE. BSE is an illness that cattle can get by feeding them other animals, including their own species, in order to consume more protein for growth.

What is Sous Vide Cooking

Science of Hydrocolloids in Cooking

NEW Science of ChocolateHow is Chocolate Made?