The lipid shown here is Arachidonic Acid in a ball-and-stick configuration. 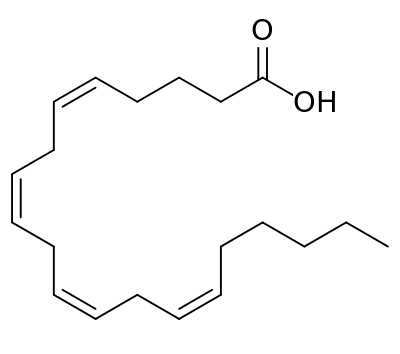 Arachidonic acid is a polyunsaturated fatty acid that is present in the phospholipids (especially phosphatidylethanolamine, phosphatidylcholine and phosphatidylinositides) of membranes of the body's cells, and is abundant in the brain. Arachidonic acid is usually localized in the glycerol backbone sn-2 position. It is a precursor in the production of eicosanoids: the prostaglandins, thromboxanes, prostacyclin and the leukotrienes (through enzymes including cyclooxygenase, lipoxygenase and peroxidase). The production of these derivatives, and their action in the body, are collectively known as the arachidonic acid cascade; see Essential fatty acid interactions for details.

Arachidonic acid is freed from phospholipid molecule by the enzyme phospholipase A2. It is also involved in cellular signaling as a second messenger.

Where is Arachidonic Acid Found?

Food sources of arachidonic acid (PFA 20:4), listed in descending order by percentages of their contribution to intake, based on data from the National Health and Nutrition Examination Survey 2005-2006

What does arachidonic acid do in the body?

Arachidonic acid is an omega 6 fatty acid which can increase inflammation in some situations.

Most of the released AA (from cells) is metabolized into a variety of compounds through a number of different pathways. Some of these include

1) Production of prostaglandins metabolized by COX-1 and COX-2 (cyclooxygenase) enzymes.

2) Conversion of arachidonic acid into leukotrienes, lipoxins, and hydroxyeicosatetraenoic acids (HETE) through the action of the enzyme lipoxygenase.

Arachidonic acid is a most needed nutritional supplement for infants

"...ARA and docosahexaenoic acid (DHA, 22:6 ω3) are important components of human milk but are lacking in cow milk and most commercial infant formula in developing countries. Due to its importance in development especially of the central nervous system and retina, the Food and Agricultural Organization (FAO)/World Health Organization (WHO) recommended that infant formula, unless specifically added, should be supplemented with ARA. Decreased postnatal ARA and DHA blood levels in premature infants were found to be associated with neonatal morbidities, while adding DHA and ARA to preterm-infant formulas led to improved visual acuity, visual attention and cognitive development..." see: Arachidonic acid: Physiological roles and potential health benefits – A review and references included.