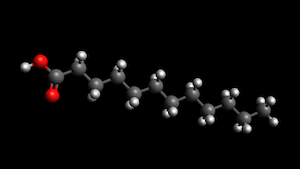 The lipid shown here is Lauric Acid in a ball-and-stick configuration. 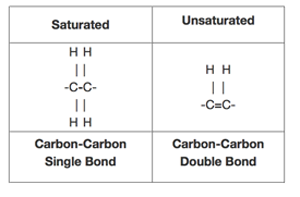 Saturated fatty acids are of the form R-COOH

Lauric acid increases total serum cholesterol more than many other fatty acids, but most of the increase is attributable to an increase in high-density lipoprotein (HDL) (the "good" blood cholesterol). As a result, lauric acid has been characterized as having "a more favorable effect on total HDL cholesterol than any other fatty acid [examined], either saturated or unsaturated".[See: Mensink, RP., et.al., Effects of dietary fatty acids and carbohydrates on the ratio of serum total to HDL cholesterol and on serum lipids and apolipoproteins]. In general, a lower total/HDL serum cholesterol ratio correlates with a decrease in atherosclerotic risk. Nonetheless, an extensive meta-analysis on foods affecting the total LDL /serum cholesterol ratio found in 2003 that the net effects of lauric acid on coronary artery disease outcomes remained uncertain. A 2016 review of coconut oil (which is nearly half lauric acid) was similarly inconclusive about the effects on cardiovascular disease risk.