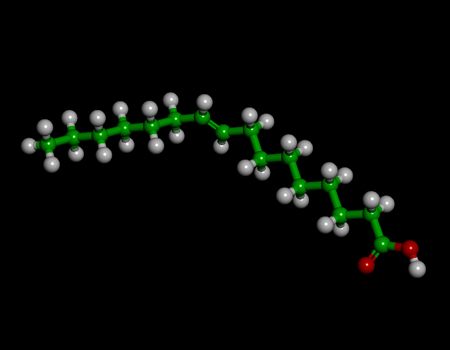 Palmitoleic acid, or (Z)-9-hexadecenoic acid, is an omega-7 monounsaturated fatty acid with the formula CH3(CH2)5CH=CH(CH2)7COOH that is a common constituent of the glycerides of human adipose tissue.

It is present in all tissues, but generally found in higher concentrations in the liver. It is biosynthesized from palmitic acid by the action of the enzyme delta-9 desaturase. 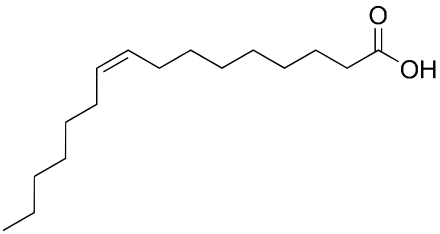 A 2001 study proposed that omega-7 unsaturated fatty acids, such as palmitoleic acid and vaccenic acid found on the skin surface, were oxidatively decomposed to 2-nonenal, which may be the cause of the phenomenon commonly known as 'old person smell', an odor apparently similar to the smell of old books.[3][4]

Python hearts use the circulating lipids to fuel an increase in performance. The research, conducted in collaboration with multiple researchers at the University of Colorado working in the lab of Dr. Leslie Leinwand, identified three fatty acids, myristic acid, palmitic acid and palmitoleic acid, for their roles in the snakes' healthy heart growths following a meal.

Researchers at the Cleveland Clinic found that by taking omega-7 for just 30 days, patients had a 44% reduction in  C-reactive protein (inflammatory) levels. [9]

Abstract: "...Adults with dyslipidemia and evidence of mild systemic inflammation (high-sensitivity C-reactive protein [hs-CRP] between 2 and 5 mg/L) were randomly allocated to receive either 220.5 mg of cis-palmitoleic acid (n = 30) or an identical capsule with placebo (1000 mg of medium chain triglycerides, n = 30) once per day for 30 days. .." see full abstract.

"...Heart disease is the leading cause of death and disability in the United States. Omega-7 fatty acids are found in the oil extracted from certain fish and nuts like macadamia. Palmitoleic acid is one of the most common omega-7 fatty acids. Many studies suggest that this oil is good for heart health. Researchers at the National Institutes of Health (NIH) want to find out more about these potential benefits..."