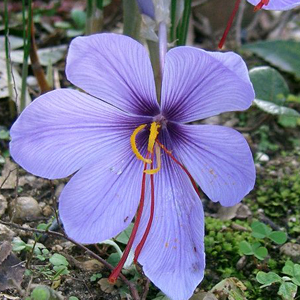 Why is Saffron so expensive?

Saffron is the most expensive spice on the market. The reason it is so expensive is because it comes from the saffron crocus bulb (Crocus sativus) which is an autumn blooming purple flower that originated in Greece. Each flower only produces 3 stigmas, So it will take about 75,000 crocus flowers to make 1 pound of saffron,

What part of the plant is Saffron from?

The saffron flower (shown to the right) has 6 purple petals, 3 golden yellow stamens and one red pistil which shows as 3 stigmas (filaments). It is the dried stigma of the flower which gives the spice saffron.

"Phytochemical researches have revealed that the color is mainly due to the degraded carotenoid compounds, crocin and crocetin the flavor comes from the carotenoid oxidation products, mainly safranal and the bitter comes from glucoside picrocrocin". (See Reference 1)

Saffron contains more than 150 volatile and aroma-yielding compounds. It also has many nonvolatile active components, many of which are carotenoids, including zeaxanthin, lycopene, and various a- and ß-carotenes. However, saffron's golden yellow-orange colour is primarily the result of a-crocin. This crocin is trans-crocetin di-(ß-D-gentiobiosyl) ester; it bears the systematic (IUPAC) name 8,8-diapo-8,8-carotenoic acid. This means that the crocin underlying saffron's aroma is a digentiobiose ester of the carotenoid crocetin. Crocins themselves are a series of hydrophilic carotenoids that are either monoglycosyl or diglycosyl polyene esters of crocetin. Crocetin is a conjugated polyene dicarboxylic acid that is hydrophobic, and thus oil-soluble. When crocetin is esterified with two water-soluble gentiobioses, which are sugars, a product results that is itself water-soluble. The resultant a-crocin is a carotenoid pigment that may comprise more than 10% of dry saffron's mass. The two esterified gentiobioses make a-crocin ideal for colouring water-based and non-fatty foods such as rice dishes.

Picrocrocin is a truncated version of the carotenoid zeaxanthin that is produced via oxidative cleavage, and is the glycoside of the terpene aldehyde safranal. The reddish-coloured zeaxanthin is, incidentally, one of the carotenoids naturally present within the retina of the human eye.

When saffron is dried after its harvest, the heat, combined with enzymatic action, splits picrocrocin to yield D–glucose and a free safranal molecule.

Safranal, a volatile oil, gives saffron much of its distinctive aroma. Safranal is less bitter than picrocrocin and may comprise up to 70% of dry saffron's volatile fraction in some samples.

A second element underlying saffron's aroma is 2-hydroxy-4,4,6-trimethyl-2,5-cyclohexadien-1-one, which produces a scent described as saffron, dried hay-like. Chemists find this is the most powerful contributor to saffron's fragrance, despite its presence in a lesser quantity than safranal.

NOTE: Dry saffron is highly sensitive to fluctuating pH levels, and rapidly breaks down chemically in the presence of light and oxidizing agents. It must, therefore, be stored away in air-tight containers to minimize contact with atmospheric oxygen. Saffron is somewhat more resistant to heat.

Saffron is not all of the same quality and strength. Strength is related to several factors including the amount of style picked along with the red stigma. Age of the saffron is also a factor. More style included means the saffron is less strong gram for gram, because the co lour and flavor are concentrated in the red stigmas. Saffron from Iran, Spain and Kashmir is classified into various grades according to the relative amounts of red stigma and yellow styles it contains. Grades of Iranian saffron are: "sargol" (red stigma tips only, strongest grade), "pushal" or "pushali" (red stigmas plus some yellow style, lower strength), "bunch" saffron (red stigmas plus large amount of yellow style, presented in a tiny bundle like a miniature wheatsheaf) and "konge" (yellow style only, claimed to have aroma but with very little, if any, colouring potential). Grades of Spanish saffron are "coupé" (the strongest grade, like Iranian sargol), "mancha" (like Iranian pushal), and in order of further decreasing strength "rio", "standard" and "sierra" saffron. The word "mancha" in the Spanish classification can have two meanings: a general grade of saffron or a very high quality Spanish-grown saffron from a specific geographical origin. Real Spanish-grown La Mancha saffron has PDO protected status and this is displayed on the product packaging. Spanish growers fought hard for Protected Status because they felt that imports of Iranian saffron re-packaged in Spain and sold as "Spanish Mancha saffron" were undermining the genuine La Mancha brand.

How to Cook with Saffron

Saffron contains more than 150 volatile components giving dishes cooked with saffron it's unique aroma. Since many of the components are hydrophobic adding a bit of alcohol (wine) will add to the release -- It is recommended that 30 minutes soaking time is needed to release the flavors.

The rule of thumb is to use about three strands a person — or a little more than half a teaspoon. Too much saffron can add a bitter taste. Some dishes such as Saffron risotto simply taste better with larger amounts.

Science of ChocolateHow is Chocolate Made?