Humulone is one of the bitters in the hop. The hop (Humulus) is a small genus of flowering plants, native to the temperate Northern Hemisphere. The female flowers, commonly called hops, are used as flavouring and stabilizers during beer brewing.

Humulone has a chemical formula of: C21H30O5 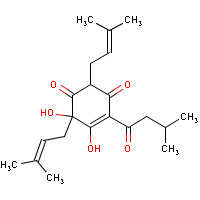 Hop resins are composed of two main acids: alpha and beta acids. Alpha acids have a mild antibiotic/bacteriostatic effect against Gram-positive bacteria, and favours the exclusive activity of brewing yeast in the fermentation of beer. The flavour imparted by hops varies greatly by variety and use: hops boiled with the beer (known as "bittering hops") produce bitterness, while hops added to beer later impart some degree of "hop flavour" (if during the final 10 minutes of boil) or "hop aroma" (if during the final 3 minutes, or less, of boil) and a lesser degree of bitterness. Adding hops after the boil, a process known as "dry hopping", adds hop aroma, but very little bitterness. The degree of bitterness imparted by hops depends on the degree to which otherwise insoluble alpha acids (AAs) are isomerised during the boil, and the impact of a given amount of hops is specified in International Bitterness Units. Unboiled hops are only mildly bitter. Beta acids do not isomerise during the boil of wort, and have a negligible effect on beer flavour. Instead they contribute to beer's bitter aroma, and high beta acid hop varieties are often added at the end of the wort boil for aroma. Beta acids oxidise and oxidised beta acids form sulphur compounds such as DMS (dimethyl-sulfide) that can give beer off-flavours of rotten vegetables or cooked corn.

"Noble hops" are low in bitterness and high in aroma, and traditionally consist of four central European cultivars, 'Hallertauer Mittelfrueh', 'Tettnanger', 'Spalter', and 'Saaz'. They contain high amounts of the hop oil humulene and low amounts of alpha acids cohumulone and adhumulone, as well as lower amounts of the harsher-tasting beta acids lupulone, colupulone, and adlupulone. Humulene imparts an elegant, refined taste and aroma to beers containing it. These hops are used in pale lagers.

The medically active ingredients in Hops are humulene and lupulene.

Dried female buds have a high methylbutenol content, which has a mild sedative effect on the central nervous system; it is used in the treatment for insomnia, stress and anxiety. If one has trouble getting sleep, hop tea before going to bed may help, though a quantity of beer has similar results. Hops' antibacterial qualities also stimulate gastric juice production.