Coriander (Coriandrum sativum), is also commonly called cilantro. Coriander is native to southwestern Asia west to north Africa. It is a soft, hairless plant growing to 50 cm [20 in.] tall. The leaves are variable in shape, broadly lobed at the base of the plant, and slender and feathery higher on the flowering stems.

All parts of the plant are edible, but the fresh leaves and the dried seeds are the most commonly used in cooking. Coriander is commonly used in Middle Eastern, Mediterranean, Indian, South Asian, Latin American, Chinese, African and Southeast Asian cuisine.

The leaves are variously referred to as coriander leaves, cilantro (in the United States and Canada, from the Spanish name for the plant), dhania (in the Indian subcontinent, and increasingly in Britain), kindza (in Georgia), Chinese parsley or Mexican parsley. The leaves have a very different taste from the seeds, similar to parsley but "juicier" and with citrus-like overtones.

The essential oil from coriander leaves and seeds contains mixed polyphenols and terpenes, including linalool as the major constituent accounting for the aroma and flavor of coriander. 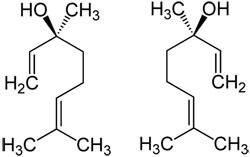 How Coriander is used in Cooking

Some people perceive a"soapy" taste and/or a bad smell. There is increased evidence that different people respond to different bitter tastes: see About the Five Basic Tastes.

The key aroma components in cilantro consist of various aldehydes, in particular (E)-2-alkenals and n-aldehydes. In a

..."Back in 2012, genetic testing company 23andMe surveyed the DNA of nearly 30,000 people of European background, who'd answered a survey about whether they loved or hated coriander. Out of the 11,851 participants who declared that they liked coriander and the 14,604 who insisted it tasted like soap, they found two genetic variants that were associated with the preferences, and the strongest variant was located within a cluster of known olfactory-receptor genes..." See original article here.

Scientists discovered that a receptor gene identified as OR6A2, which resides on chromosome 11, is responsible for binding the various aldehyde components to its receptors. people with the OR6A2 receptor gene are able to detect aldehydes. The scientists proposed that OR6A2 may be the olfactory receptor that contributes to the detec- tion of a soapy smell from cilantro in European pop- ulations.

"..."The same chemical can be found in both appealing and unappealing places - cheese and body odour, for example. Conversely, the same ingredient - such as cilantro - can contain both pleasant and unpleasant chemicals. Whether stinky cheese and cilantro are delicious or disgusting depends on your particular perception of many different chemicals..." from There Could Be a Genetic Reason For Why You Either Love or Hate Coriander

Coriander has been used as a folk medicine for the relief of anxiety and insomnia in Iranian folk medicine. Experiments in mice support its use as an anxiolytic. Coriander seeds are also used in traditional Indian medicine as a diuretic by boiling equal amounts of coriander seeds and cumin seeds, then cooling and consuming the resulting liquid. In holistic and some traditional medicine, it is used as a carminative and for general digestive aid. Additionally, coriander juice (mixed with either turmeric powder or mint juice) is used by some as a treatment for acne, applied to the face like toner. Coriander can also produce an allergic reaction in some people.