Why does Milk Curdle?

In cookery, curdling is the breaking of an emulsion or colloid into large parts of different composition through the physico-chemical processes of flocculation, creaming, and coalescence. Curdling is intentional and desirable in making cheese and tofu; unintentional and undesirable in making sauces and custards. Curdling occurs naturally in milk if the milk is not used by the expiration date, or if the milk stays out in warm temperature.

Milk is composed of several compounds, primarily fat, protein, and sugar. The protein in milk is normally suspended in a colloidal solution, which means that the small protein molecules float around freely and independently. These floating protein molecules refract light and contribute (with the suspended fat) to the white appearance of milk. Normally these protein molecules repel each other, allowing them to float about without clumping, but when the pH of their solution changes, they can attract one another and form clumps. This is what happens when milk curdles, as the pH drops and becomes more acidic, the protein (casein and others) molecules attract one another and become "curdles" floating in a solution of translucent whey. This clumping reaction happens more swiftly at warmer temperatures than it does at cold temperatures.

What are the poducts in milk that allow it to curdle?

Milk is an emulsion or colloid of butter-fat globules within a mixsture containing water, carbohydrates, minerals and proteins.

What Proteins are contained in milk?

Most milk drank in the US come from the mammary glands of cows. The major proteins found in milk are unique and not found in tissues other than the mammary glands. Milk proteins, particularly the caseins, have an amino acid composition helpful for growth and development of the young. Other proteins in milk include an array of enzymes, proteins involved in transporting nutrients, proteins involved in disease resistance (antibodies and others), growth factors, etc. (see Reference 1). Casein makes up 79.5% percent of the proteins found in cow's milk.

Whey protein comprises 19.3% of the protein content in milk. There are 3 or 4 caseins in the milk of most species; the different caseins are distinct molecules but are similar in structure. All other proteins found in milk are grouped together under the name of whey proteins. The major whey proteins in cow milk are beta-lactoglobulin and alpha-lactalbumin.

β-Lactoglobulin is the major whey protein of cow and sheep's milk and is also present in many other mammalian species; a notable exception being humans. 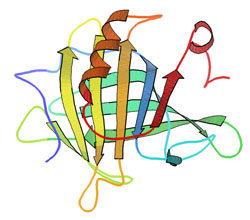 Casein contains a high number of proline residues, which do not interact. There are also no disulfide bridges. As a result, it has relatively little tertiary structure. It is relatively hydrophobic, making it poorly soluble in water. It is found in milk as a suspension of particles, called casein micelles,

Casein contains a high number of proline residues, which do not interact. There are also no disulfide bridges. As a result, it has relatively little tertiary structure. It is relatively hydrophobic, making it poorly soluble in water. It is found in milk as a suspension of particles, called casein micelles, 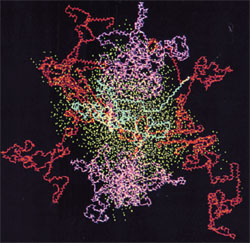 The caseins in cow milk may include different forms, with cow milk typically containing one of two types of beta casein. depending on an individual cow's genetic profile, the milk produced will contain either A1-beta caseins or A2-beta caseins.

All of the casein molecules have at least one ester bound phosphate. None of the whey proteins have this.

The isoelectric point of casein is 4.6. Since milk's pH is 6.6, casein has a negative charge in milk.

In proteins with even distributions, the hydrophilic and hydrophobic regions basically cancel each other out. It is due to the amphiphilic nature of the casein molecules that one of the most important properties of casein emerges, the casein micelle. Most of the caseins in milk are found in intricate loose aggregations called micelles.

k-Casein and curdling of milk

The other stabilizing effect is due to a property of K-casein. K-casein has within its structure a carbohydrate group which is esterified to threonine in the protein. This carbohydrate group contains some negatively charged groups. The result is that K-casein is made more hydrophilic at one part of the molecule. In the micelle, K-casein and to some extent Bcasein self-locates as close to, or extending into the water interface of the micelle. This stabilizes the micelle by preventing aggregation of the micelles by steric repulsion (by preventing close approach between casein micelles) For K-Casein the peptide bond between the 105th and 106th amino acid is vulnerable to hydrolysis by proteolytic enzymes (microbial coagulator or rennet). This is the mechanism for curd formation (by removing the carbohydrate containing portion of the protein and thus reducing steric stability). Losing the protection of the K-casein allows the casein micelles to aggregate and form a coherent curd.

In order to understand how chymosin coagulates milk, one needs to know something about milk proteins. The majority of milk protein is casein and there are four major types of casein molecules: alpha-s1, alpha-s2, beta and kappa. The alpha and beta caseins are hydrophobic proteins that are readily precipitated by calcium - the normal calcium concentration in milk is far in excess of that required to precipitate these proteins. However, kappa casein is a distinctly different molecule - it is not calcium-precipitable. As the caseins are secreted, they self-associate into aggregates called micelles in which the alpha and beta caseins are kept from precipitating by their interactions with kappa casein. In essence, kappa casein normally keeps the majority of milk protein soluble and prevents it from spontaneously coagulating.

Chymosin proteolytically cuts and inactivates kappa casein, converting it into para-kappa-casein and a smaller protein called macropeptide. Para-kappa-casein does not have the ability to stabilize the micellar structure and the calcium-insoluble caseins precipitate, forming a curd.

Casein molecules can also be separated from the whey by precipitation of the casein with acid (similar to what happens in the stomach when milk is consumed) or by disrupting the micellar structure by partial hydrolysis of the protein molecules with a proteolytic enzyme. In the stomach of the young of many species is an enzyme called rennin which specifically hydrolyzes part of the casein micelle resulting in formation of a curd. A classic precipitation method for casein in cow milk which is done in the laboratory is to slowly add HCl (0.1 N) to lower the milk pH to 4.6. The casein will gradually form a precipitate while relatively little of the other milk proteins will precipitate. Different combinations of controlled acid precipitation and enzymatic hydrolysis of casein are the foundation of the cheese industries. Often specific bacterial cultures are used to establish the conditions for lowered pH and secretion of proteolytic enzymes which form the different types of cheese.

Whey is the liquid remaining after milk has curdled and been strained. Whey proteins consist of α-lactalbumin, β-lactoglobulin, serum albumin, immunoglobulins,

Whey protein is a high-quality protein naturally found in milk products. It is a “complete” protein containing all of the essential amino acids required of the human body and is easy to digest.

Whey proteins, also called serum proteins, do not contain phosphorus  and do not coagulate at  pH 4.6.

whey can be used to make ricotta cheese. Traditinally the whey from sheeps milk is cooked down until it is soft fluffy curds.

As the pH drops and becomes more acidic, the protein (casein) molecules attract one another and become "curdles" floating in a solution of translucent whey. This clumping reaction happens more swiftly at warmer temperatures than it does at cold temperatures.

Curds are a dairy product obtained by coagulating milk in a process called curdling. The coagulation can be caused by adding rennet or any edible acidic substance such as lemon juice or vinegar, and then allowing it to sit.